Salvador Dalí’s popularity – during his long and illustrious career, and still very much today – was not unlike that of a rock star. He was not merely a great artist, but a pop celebrity as well.

I remember an anecdote shared years ago by Eleanor Morse, who, along with her husband Reynolds, was benefactor of the Dalí Museum in St. Petersburg, Florida. She was recounting what Dalí himself once told her. Had his compatriot, the Catalan artist Joan Miro, found himself in a taxi cab in New York City, no one would have recognized him, Dalí reasoned.

As it turns out, Dalí’s connection to rock star status went beyond his own reputation as a public figure; he actually had at least four connections of varying importance with rock legends.

According to the autobiography, Devils & Blue Dresses by 1960s rock legend Mitch Ryder, the high-energy pop music star – who fronted the band, Mitch Ryder and the Detroit Wheels – dined with Dalí at the iconic Plaza Hotel in Manhattan. It seems to me – and this is based solely on a memory I have, the accuracy of which I’m uncertain – that Ryder gifted Dalí an ornate jacket, knowing how Dalí never shied away from flamboyance. 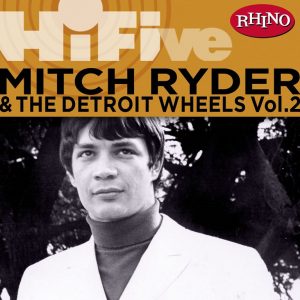 Inarguably, a far bigger rock star – Elvis Presley – also had a connection with Salvador Dalí, and it too involved a gift of clothing to the master of surrealism.

In the 1975 BBC film documentary, Hello, Dalí, there’s a scene where Dalí drops his walking stick while strolling along the grounds of his villa at Port Lligat, Spain. As the camera zooms in, Dalí is seen pulling up his gem-studded socks, pointing out to reporter Russell Harty that they were given to him by Elvis Presley – affecting a kind of vocalist’s tone as he pronounced (sang) “Preeesley!” 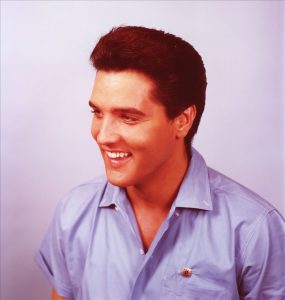 The most involved and significant connection between a rock star and Salvador Dalí was Dalí’s creation of a cylindrical hologram of glam rocker Alice Cooper – or, more precisely, his brain! 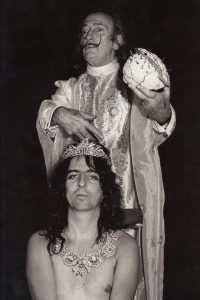 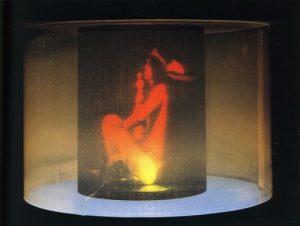 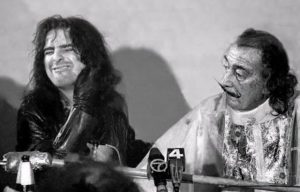 The press conference featuring the two outrageous personalities easily made international headlines. Dalí explained that he chose Cooper because he was “the best example of total confusion! The more confusion the better!” 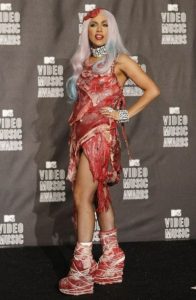 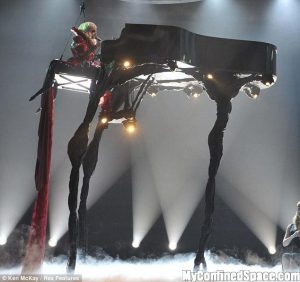 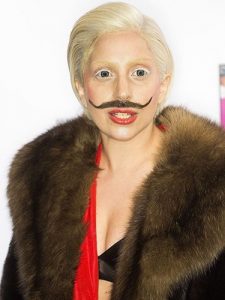 Her meat dress, and piano elevated on stilt-like legs, were unquestionably inspired by Salvador Dalí. She has even been seen posing with a Dalí-style mustache.