If there’s any doubt that Salvador Dalí was a genius and master painter, it’s promptly dispelled when you feast your eyes on his 1944-’45 painting, “Apotheosis of Homer.”

This just might be a kind of masterful surrealist counterpart to Dalí’s more pop and op art sensation, “Tuna Fishing” (1967-’68), in that – like “Tuna Fishing” – “Apotheosis of Homer” manages to synthesize a medley of ideas, influences and techniques in a single truly impressive masterpiece.

On the broader perspective, the title tells us Dalí has paid homage to the Greek poet, Homer, whose works “The Odyssey” and “The Iliad” are iconic examples of classic literature. Dalí’s art was heavily influenced by mythology, and he himself believed his ancestry could be traced to Greece.

Homer was blind, and Dalí brilliantly conveys that by depicting the bard hewn from rock, while the angel of speech – as Dalí explained it – is born from his mouth, not without a drop of blood.

Moving from left to right, we see a Baroque scene in the sky of rearing horses, naked women, and trumpeting cherubs, while, at right, a reposed Gala – looking very much as she did in “One Second Before Awakening from a Dream Caused by the Flight of a Bee Around a Pomegranate” (1944) – dreams of a mélange of images, some not so comforting.

One is the twisted, contorted and melting human figure, perhaps symbolizing nightmares. The nightmare of war – in the wake of the dropping of the atomic bomb on Hiroshima – doubtlessly influenced Dalí here, conveying a disquieting mood of unease. 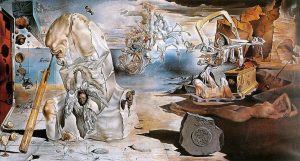 To my knowledge, your Dalí.com blogger is the only Dalí expert to have pointed out recently that this horrifying figure is unmistakably the forerunner of the similarly anguished central figure in Dalí’s “Vision of Hell” of 1962.

On a more specific level, “Apotheosis of Homer” opens the floodgates on an admixture of extraordinary details floating around in this exceptional Dalínian dream snapshot – surely one of the greatest paintings in all of Surrealism. And some of the familiar Dalí symbols and visual devices make an appearance here as well.

The iconic Dalí crutch appears in several places, including one tied with a string to a thick piece of bamboo – helping to support the forward-leaning statue of Homer.

Dalí’s fascination with how the shape of one thing can suddenly morph into something different can be seen in the painting’s upper left. A bird with outstretched wings becomes, below it, the shape of a snake, below which is the similar form of a bow (and arrow), and then – moving further down – the same basic form becomes a recumbent man over a supine woman.

A strange bust of a man, whose head is also a walnut, is seen again, reduced to broken pieces on the ground. Balls, peaches, beans and other elements populate this truly fanciful canvas painted with the precision of a Renaissance master.

Indeed, it’s more than likely that Dalí was influenced by Hieronymus Bosch’s renowned masterpiece, “Garden of Earthly Delights.” The big difference here is that, unlike the dark spirit of Bosch’s work, Dalí imbues his work with the bright light of the Mediterranean, which informed most of his work most of his life. The city of Munich, Germany, is surely fortunate to have this remarkable painting in its midst.