Among the many things Salvador Dalí did that one can safely call mind-blowing is how he played with spatial relationships in his paintings.

This man wanted to be remembered as the dean of DIFFERENT!

Think about it. Everything Dalí did was counter to “normal.” Of course, anyone expecting normalcy from Salvador Dalí was about as wise as the person who tries to thread a camel through the eye of a needle! It’s not going to happen.

So here, in Dalí’s stunning 1958 “Ascension of Christ” (sometimes called simply “Ascension”), we have a Dalí work that sort of messes with our sense of conventional perspective. Is the image of Christ rising? Is he traveling back into a distant vanishing point? Could he even be descending toward us? Our sense of space, and even time, gets a bit turned on its head here – a hallmark of Dalí’s unique vision and perhaps his attempt to confound us a little. 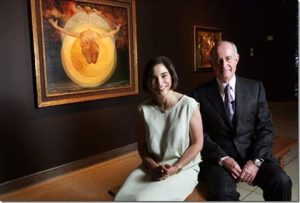 Is the prominence of Christ’s feet suggesting he’s about to set foot on a temporal plain? Or are the feet of Jesus the last thing one would have seen before he ascended toward what is here an electrified sense of heaven? Surely the soiled feet symbolize the walks Jesus made with his Disciples.

So many questions — exactly what Dalí intended. He also intended to share with us one of the most important sources of his creative inspiration: his dreams. He had explained that the genesis of this painting came to him one night in a dream, where the nucleus of an atom inspired his sense of “the unifying spirit of Christ.”

Perhaps no other Dalí painting, Dalí print, or work in other medium – intended to capture the spirit of the artist’s Nuclear-Mysticism period – does so quite as literally as “Ascension.” After all, we have the “nuclear” idea in the cell-like circle that dominates the backdrop behind Jesus, and the “mystical” aura in every other aspect of this large canvas.

One example is how Dalí’s wife, Gala – often portrayed as the Holy Mother – mysteriously watches from the heavens, tears shed to perhaps convey the sadness of seeing her son departing the familiarity of the earthly world. Based on how she’s positioned in relation to how Christ is rising, Dalí again toys with our perception through perplexing convolutions of space and time.

But the ultimate joy of appreciating great Dalí art – any art, really – is that we’re free to float our own interpretation of what the artist meant. Or at least what we think and feel as we consider the work of art. Certainly the large nuclear sphere may also symbolize the sun, which gives life to all. And the florets of a sun flower, arranged in the logarithmic curve by which the mathematically adept Dalí was fascinated, are undeniable.

Maybe there’s the suggestion of a sea urchin shell, too – a common element in Dalí’s work.

It adds up to what I’m calling the “Dalí difference.” He sought to be different because he knew no other way – in art and in life. It is, for me, one of the most fascinating and impressive characteristics of the man: he saw beyond the obvious, dove deeper below the surface, imagined beyond the rational — and beyond the irrational!