When your journey takes place in the head of Salvador Dalí, there are bound to be mysteries along the way.

Today’s post explores one of the finest Dalí paintings no one ever talks about – because virtually no one knows of it! It goes by either “The Hour of the Monarchy” or “The Royal Hour.”

*** (Further in this post, I reveal how Dalí came up with the intricate mosaic around the circumference of this work.) ***

There’s good reason why the10-foot-diameter painting is round: it was meant for and appears on the domed ceiling of the Albeniz Palace in Barcelona, Spain. This grand building is where Spain’s king stays when he visits Barcelona, and my research indicates no one but Spanish royalty is allowed in this edifice, and then only on very special occasions. 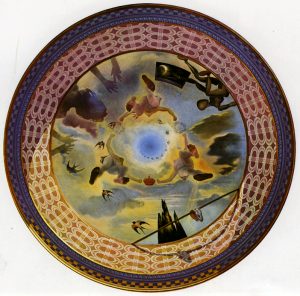 This would account for there being very little known, or at least published, about this unique Salvador Dalí masterpiece. It’s presumed Dalí painted it at Port Lligat and then it was installed on the palace ceiling. But for all we know, Dalí may have literally painted it directly on the ceiling, a la Michelangelo and the Sistine Chapel! (Doubtful, but intriguing to ponder.)

What we can consider, with some certainty, are some of the interesting elements in this work.

The outer circumference mosaic – I believe this fact has been virtually unknown to most Dalí aficionados until now – is based directly on Andrea Mantegna’s ceiling fresco in Mantua, Italy, titled “Putti and Servants.” Here’s an image of it — see for yourself: 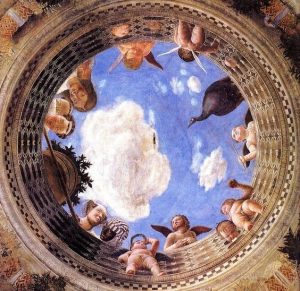 Dalí often quoted details from other artists’ work in his own creations. In this case, he did a literal transcription of the Mantegna piece, as you can see from the reference photo I’ve included here. If imitation is the sincerest form of flattery, then Mantegna can feel flattered indeed! Moreover, it’s clear that the entire concept of the low-angle perspective — forcing us to look heavenward — owes to Mantegna’s concept.

Moving inward from this interesting outer-ring design, our eye is drawn upward into the work and the sky to which everything is headed, thanks to the foreshortened perspective Dalí chose. He was able to paint his models quite accurately this way through the use of a glass floor in his studio. It’s inevitable that we might compare this angle of vision to that seen in Dalí’s “Ascension” painting of 1958, which I recently blogged about. A similar effect was achieved in Dalí’s lovely “Dance of the Flower Maidens,” itself a circular composition.

Dalí’s signature soft watch is a delightful tromp l’ oil detail, drooped over a dowel – again plucked directly from the Mantegna fresco (the dowel, not the watch!) – whose shadow is realistically cast on the outer design work. The cypress trees link the work to Dalí’s Spanish countryside, while the wooden art manikin reminds us of the fundamentals of the craft of which Dalí was a master.

Meanwhile, swallows fly in a circular pattern, appearing smaller as we move deeper, or rather higher into the painting, ultimately forming a logarithmic spiral whose mathematical properties Dalí was fascinated with.

Finally, the silhouetted female figure at left is surely Dalí’s wife and muse, Gala, who has made an appearance in countless Dalí paintings, drawings, and watercolors. A red crown tops off the royal aura of this magnificent work, which, sadly, precious few have had the opportunity to see.

Call it “The Hour of the Monarchy.” or “The Royal Hour.” Or, perhaps, “The Royal Mystery”!