By now, surely everyone’s heard of the dubious phenomenon known as “fake news.” But it doesn’t just affect politics; it can also rear its head in the world of art. In the case of Salvador Dalí, it has – in several ways. One I’ve just come across, others have been annoying long-term misrepresentations. 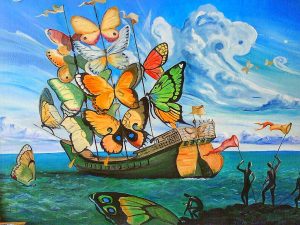 This is not a Dalí!

is NOT – repeat, NOT – by Salvador Dalí! Pay no attention to the fact that it obstinately shows up on a ton of Internet sites displaying the art of Dalí. It may look a bit surreal. It may approximate the style and technique of Dalí.

BUT IT IS NOT A PAINTING BY SALVADOR DALI!

The work is that of Vladimir Kush. It has no business being on all these Dalí sites, and I wish someone would jettison the picture from its incorrect placement and misidentification.

Not saying anything bad about the painting or the artist. It’s nice. It’s just not Dalí. And this was made clear by another Dalí aficionado, who published some time ago a similar clarification of the matter. He’s Enrique E. Zepeda, attorney, collector and Dalí expert who does art appraisals and opinions of authenticity, partnered with Bernard Ewell.

Enrique reminded me of another work by Mexican artist Octavio Ocampo, showing the profile of an elderly couple that creates this clever multi-pronged double-image effect. 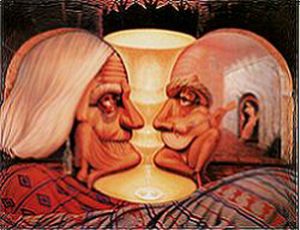 This is not a Dalí!

Once again, it shows up on countless internet sites as being a Dalí; it is not.

Here’s perhaps an even more outrageous bit of fake news. It came into my orbit by way of Pinterest, landing in my email and making me do a double-take. 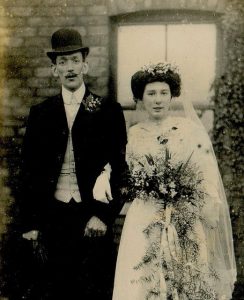 This is neither Dalí nor Gala.

It was presented as “Dalí’s wedding photo.” The only problem is that the man is not Dalí and the woman is not Gala. I admit to looking very, very closely at the fellow, who does bear a resemblance to Dalí. But it’s not our man. The woman? Well, if that’s Gala Dalí, I’ll eat a barbecued giraffe with a side of grilled grasshoppers.

Meanwhile, this blogger is more than a little frustrated over what seems to be an extraordinarily long delay in the release of a book that was supposed to be coming out about the wild, daffy surrealist ball Dalí and Gala threw at the Del Monte Lodge in Pebble Beach, California, in 1941. The book, Dalí’s 1941: Salvador Dalí’s Surrealist Ball, Through the Lens of Julian P. Graham, is supposed to feature many photographs of the unique fund-raising event, at which a host of celebs were in attendance, including Bob Hope, Clark Gable, Gloria Vanderbilt, and Ginger Rogers, among others. 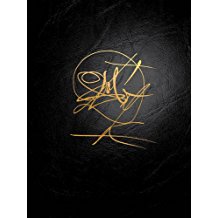 Here’s a cool little link to some of the party action:

In other news, it was recently reported that a new movie about Dalí is to begin shooting soon, starring Ben Kingsley in the role of maestro Dalí in the 1970s, I believe. Let’s hope this actor gets it right, or close to right. Every actor I’ve seen who’s dared to take on the daunting role ends up looking foolish. They try much too hard to adopt the persona that helped make Dalí such a colorful figure. The results have been clumsy, inauthentic, and embarrassing.