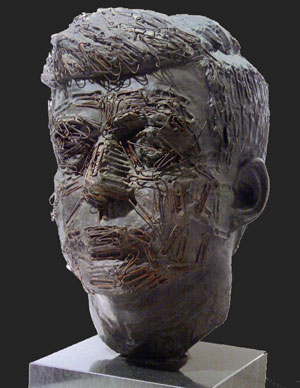 Skillfully fashioned from Dalí’s own hands – not merely a three-dimensional object based on a drawn design by the artist – this intriguing bronze is covered with….paper clips! How utterly Dalíesque that he would choose to symbolize the bureaucracy in which world leaders are often mired, by the use of the most mundane trappings of the modern administrative office drawer!

Yet Dalí author Robert Descharnes attaches another meaning – a far more disquieting one – to the morass of gold clips clinging to JFK’s face and head: “The idea of putting paper clips on this original bust of the assassinated President,” Descharnes writes, “conjures up the image of a death mask, as if it was covered with bees or grasshoppers (symbols of death and destruction for Dalí). Following this, when it was edited in bronze, the face was cleaned up a bit to let the eyes be seen.”

Dalí had a penchant for melding profound subject matter with common objects from everyday life, not unlike the peculiar juxtapositions that populate so much of our dream imagery. In his Bust of Dante, 1964, for example, silver spoons adorn the hair atop that bronze in green patina. His 1965 Chalice of Life, studded with gold, emeralds, sapphires, rubies and diamonds, also is engraved with dead leaves devoured by worms.

What the Bust of JFK, with its paper clip motif, reminds us is that Dalí was driven, if not obsessed, by his need to be different. Take, for instance, his prints of L’ Apocalypse; they were formed not merely by rendering an image on a matrix, but instead by exploding specially produced grenades filled with nails. Litho stones prepared for his Don Quixote suite were worked on, in part, by an actual octopus Dalí dipped in ink, while other images in the same project were borne of the random scattering of ink pellets shot from a rifle.

John F. Kennedy was also the subject of an original etching by Dalí, and both works in tribute to the 35th president were followed – in commemoration of the U.S. Bicentennial in 1976 – with Dalí’s paintings and graphics that paid homage to Abraham Lincoln. Multi-colored cubes inspired by the then new science of computer optics in effect replaced the Kennedy paper clips. Now another president’s image – Lincoln – is covered by multi-colored squares inspired by computer image pixilation.

Bust of John Fitzgerald Kennedy – a supreme example of Pop Art as well as the special Surrealism of Dalí – presents the late President in a perplexing light, at once revered for the enormously important influence he had on world affairs and the direction of the United States during his administration, yet seemingly a slave to the realities of the system within which he inevitably had to operate. Could the paper clips represent a kind of human bondage? The constraints of a society whose mores and machinations are never quite amenable to substantive change?

Of course, Dalí’s own thoughts on his creations add intrigue, insight, and – not uncharacteristically – confusion to the equation. Of Bust of John Fitzgerald Kennedy, Dalí commented: “The American is a polyp. Take an American individually, and he is not able to do much of anything. Take them collectively, five or six at a time, and you will have some excellent results, thanks to the quantity. We arrive at wonders: quantity of money; quantity of organization; quantity of technology – what do you think of Kennedy? – in a country of polyps, do what is convenient for polyps. The individuals obey the master polyp through the intermediation of the polyps. There could never be in the United States a chief of state as original as De Gaulle, with such profound thought.”

What should never be discounted when considering so many objects d’ art by Dalí, however, was his undeniable sense of humor. Few would view Bust of John Fitzgerald Kennedy and not find the paper clip treatment amusing. Surely Salvador Dalí intended such a reaction, and perhaps that was his ultimate aim: to make us smile in remembrance of, and respect for, a great American hero.