What a joy to discover new things in the paintings, drawings, prints, sculpture, and mix-media works of Salvador Dalí. Same goes for his many books, when I sometimes re-read one – or a section of one – and pick up on things I somehow missed first time around.

Today let’s focus on something of which I’m not sure many Dalí enthusiasts are aware. It’s a bit esoteric, but hopefully not to those reasonably serious about digging a little deeper and interested in making new connections between sometimes disparate elements.

I’ve long been aware, of course, of Dalí’s 1929 Portrait of My Father. He clearly depicted his father here as a bold, intimidating figure. And perhaps a bit of an ominous one, as well. 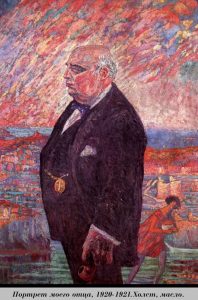 Some observers have figured that the girl in the background is probably Dalí’s younger sister, Anna Maria, and that she appears to be fleeing or at least trying to avoid being seen by her dad. This might further suggest his authoritarian persona.

But what had been speculation that this young lady was Dalí’s sister has now become fact. I owe another debt of gratitude to the Fundacio Gala-Salvador Dalí in Figueres, Spain, whose online Catalog Raisonne is a true treasure trove of valuable information.

Because just today as I’m writing this I became aware of the 1920 canvas, Untitled – Portrait of the Artist’s Sister (private collection; Portrait of My Father is owned by the Fundacio). 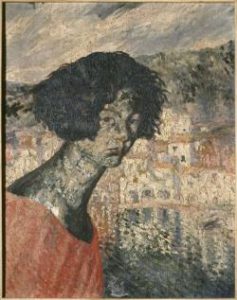 There can be no question now that the fleeing girl in Portrait of My Father is indeed Anna Maria; she looks the same in the 1920 work, and this time has visible facial features and the same orange top and hair do.

This little revelation may seem arcane. But for Dalí historians like me – and hopefully other like-minded Dalínists out there – it’s these kinds of discoveries than make the study of Salvador Dalí’s life and work more meaningful and infinitely fascinating.

This may also fall under the esoterica label, but I’ve detected a contradiction of sorts that even the Fundacio Gala-Salvador Dalí in Spain concedes is a puzzle they weren’t aware of, needs to be solved, and has been placed on their To-Do list.

It involves the 1942 Painting, The Ascension (not to be confused with Ascension of Christ of 1958). It’s very much an unknown Dalí work to most folks, but that’s not the relevant point. Instead, the Fundacio’s Catalog Raisonne presents it as a separate oil, in and of itself. 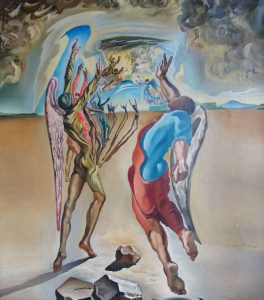 But why, then, does it appear as what seems to be the middle panel of a larger horizontal piece, Study for the Set of Romeo and Juliet (1942, oil on cardboard, private collection)? 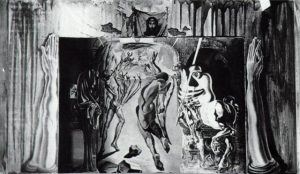 A Fundacio staff member has thanked me for pointing this out and pledges to get back to me when they’ve resolved it. Stay tuned.