If there’s any doubt that Salvador Dalí did it all, try to find any artistic road on which he didn’t travel. Impossible.

One outlet through which Dalí made his mark was photography. Not behind the camera (usually), but in front of it. And in creative collaboration most famously with the celebrated French photographer Philippe Halsman.

Today I want to look at Dalí Atomicus of 1948, doubtlessly not only the best-known photograph with which Dalí was involved, but indeed one of the most famous photographs of an entire century. 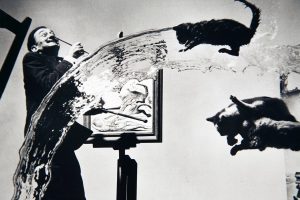 The Dalí/Halsman collaboration was such a tour d’ force in the annals of creative pairings. They even did a book together – Dalí’s Mustache – featuring extraordinarily clever photos of Dalí’s upper lip hair in every imaginable pose, together with amusing text calculated to get a chuckle out of readers. 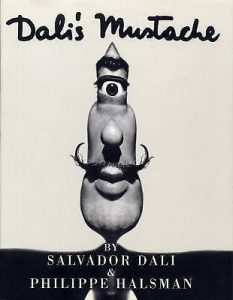 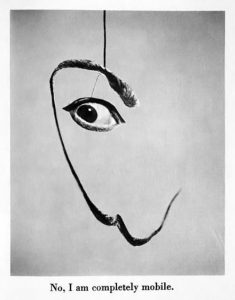 Dalí Atomicus took upwards of 20 takes before the duo was completely satisfied. The two creative geniuses endeavored to depict the phenomenon of intra-atomic space, in which – at the sub-atomic level – nothing touches anything else. 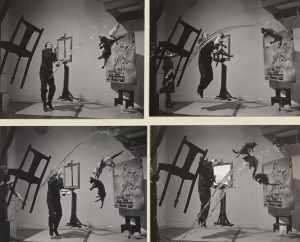 Various elements were hung on virtually invisible wires, while water and cats where tossed, and Dalí leaped into the frame on que – until all the elements levitated for the perfect storm. (Dalí was on record saying not only did the cats not mind being tossed, but that they appeared to enjoy it!)

On the right of the composition is a reproduction of Salvador Dalí’s great masterpiece, Leda Atomica – itself a quintessential representation of his interpretation of quantum physics melded with the iconic Greek myth of Leda and the Swan.

What I don’t think many people realize is that the wires were retouched out. And Dalí painted water and cats legs onto the canvas in the middle of the photo, sort of echoing the larger photographic tableau.

Photos of Halsman and Dalí working on this project, and the persistent leaps Dalí took to eventually achieve the final effect, are nearly as popular as the finished photograph itself.

(Images used under Fair Use provisions for journalistic purposes only, with acknowledgment of the estate of Philippe Halsman and copyright therein)