Salvador Dalí did a variety of interesting greeting card designs for Hallmark, but for my money none was as lovely and painstakingly executed as the one here, though I don’t know if it has a title. No matter; what we can comfortably call it is quintessentially Dalínian by the Surrealism’s greatest master. And especially unique for its double-imagery. 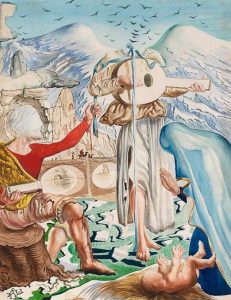 I find it significant, perhaps ironic, that time and again some of Salvador Dalí’s very best work was done on commission. His magnificent series of magazine advertisements for Bryan Hosiery are a great case in point: they were simply some of Dalí’s finest mixed-media art pieces. 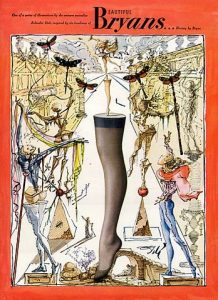 The Christmas card here features at least four double-images – a penchant for which Dalí had no equal. He was the 20th century master of the double-image and this work proves it once again.

This picture, in fact, includes more double-images than any Dalí watercolor/gouache I can think of.

Let’s start at the top.

The birds in the sky form a human face – or, rather, that of the guitar-playing angel who is slightly elevated off the ground. This motif was used in a number of other Dalí works in various mediums, including his design, Dance of the Flower Maidens, for a dinner plate; his design for one side of his Peace Medal; and in one of three wall-sized murals for the Manhattan apartment of cosmetics queen Helena Rubinstein. 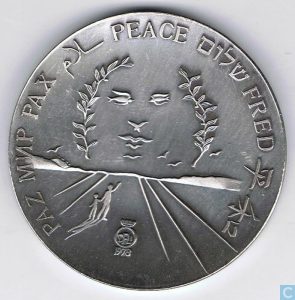 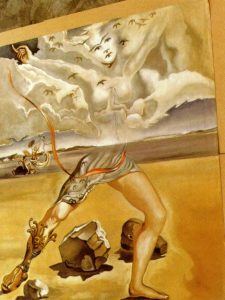 Below the angelic face in the featured Christ card are snow-capped mountains – which also cleverly serve as the angel’s magnificently outsized wings.

Direct your gaze down and to the left and you’ll discover that the man playing a guitar has a head that doubles as an opening in the cliff behind him. Meanwhile, his musical instrument is at the same time the space under the bridge.

Am I missing anything? It’s certainly possible. And therein lies just one of the reasons why the art of Salvador Dalí is so engaging, compelling, and often just plain fun! He engages us; he forces us to look, look, look!

At the same time the work taken as a whole is really a lovely depiction of the birth of the infant Jesus, who, lying on a bed of hay, is joined here by a prayerful Virgin Mary in gold-trimmed regalia, while the aforementioned figure at left may be that of Joseph.

The work appears to be done in gouache or watercolor, though I don’t know for certain. Whatever the medium, it was executed with the absolutely superb draftsmanship that was a hallmark of Dalí’s genius and popular appeal. 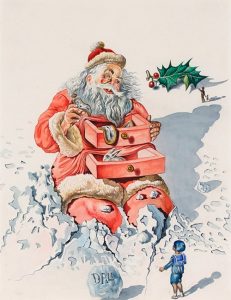 Who needs a big toy bag when you’ve got built-in drawers!