Salvador Dalí claimed he was not much of a music appreciator. He insisted that music was immensely inferior to art – painting, more precisely – and that the eye clearly triumphed over the ear.

And yet Dalí was a master of contradiction. He would hum and whistle to himself while he worked tirelessly at his easel, or on the matrix of whatever print he might have been creating. He was said to favor recordings by Wagner, likening the scratchy sound of needle on vinyl to sardines frying in a pan.

I’m personally not aware that Dalí played any instrument, and yet you can find photos showing him seated at a piano; it appears he knew what he was doing. He certainly included musical instruments in many of his paintings – the piano most prominently, owing to his recollection of the al fresco concerts the Dalí family friends, the Pitchots, would hold in Cadaques when Salvador was a young boy.

And of course, his surrealism was populated by violins and cellos and tubas and guitars and, yes, those ubiquitous grand pianos — usually misshapen, but instruments nonetheless.

One musical arena that seemed to strike a chord with Dalí was the design of record album covers for a variety of musical artists. One of the most commonly known is Lonesome Echo, an album by Jackie Gleason – himself something of a surrealist within musical and comical arenas. 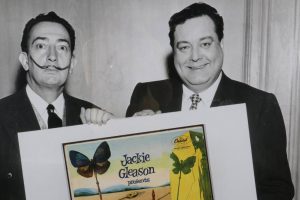 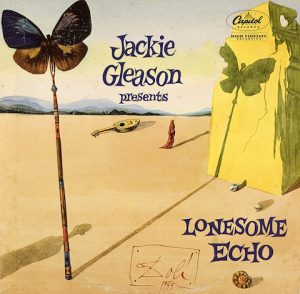 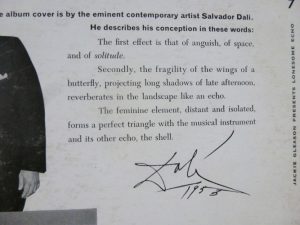 And there were a host of other covers, some of which you see here. 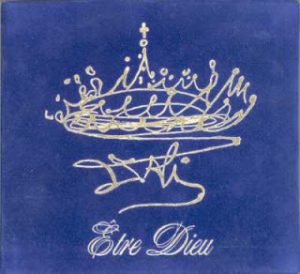 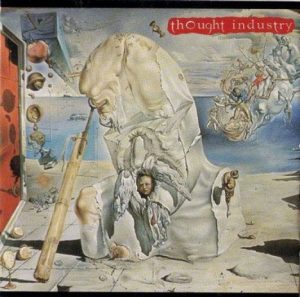 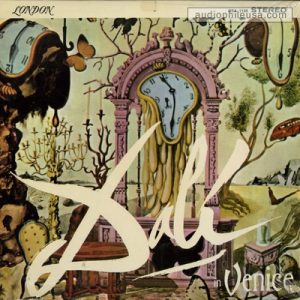 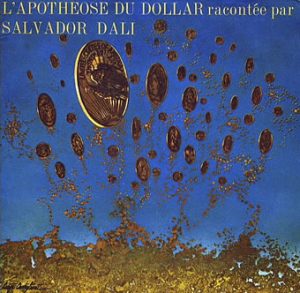 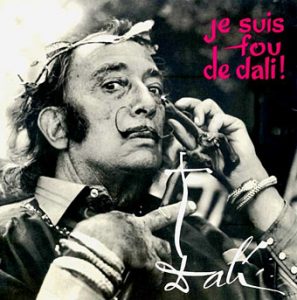 But one that seldom seems to get mentioned is one of the most surrealist and unique – in my view, anyway – and ironically features almost all collage, save for the metallic gold lettering and a swirl or two of paint.

It’s the LP cover for Jho Archer, a Haitian jazz musician. But aside from Archer’s name lettered with gold metallic paint, a flame-like swirl shooting from the television set, and Dalí’s own signature, everything else is collage: seven butterflies; the TV; lilies that double as gramophone speakers; and Archer’s mouth, seen twice. Oh, and there’s a red Dalí crutch holding up one of the flowery speakers, plus a green-hued landscape on the TV screen. These latter two elements were painted. 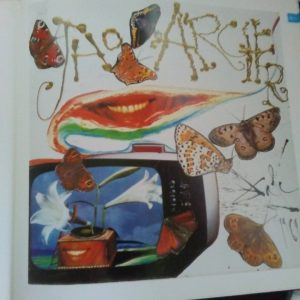 But except for those touches, the design is collage-driven – and that’s very cool. It’s a decidedly different and Dalínian album design, and I for one would love to know what Archer’s reaction was to it. It also seems to be a bit rare. I’ve seen pretty much all the other album covers shown here offered now and again on ebay, but have never seen the Jho Archer piece on the auction block.