I’ve had countless discussions with fellow “Dalínists” about works brought to our attention that are alleged to be by Dalí, but feature characteristics that raise doubts. Sometimes we’re surprised to learn that many are indeed genuine, even when certain peculiarities raise some red flags.

A widely reproduced oil on panel from 1936 is, in my view, one of those Dalí works that – had we not known better – could be placed under suspicion, mainly due to technique.

I’m talking about The Fossilized Automobile of Cape Creus. Dalí always decried mechanical things (pocket watches come to mind), and that goes for automobiles (he never drove one).

So he shows a car essentially entombed within the background cliffs of Cape Creus, which were a career-long inspiration for him. 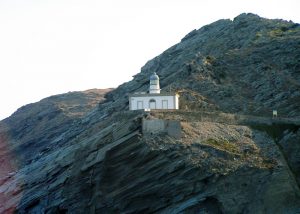 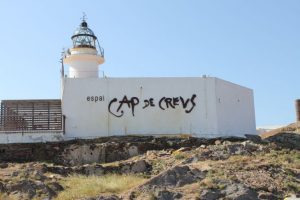 Meanwhile, fishermen lift a boat while several others seem oblivious to everything as they nap, their heads propped up by their hands.

But it’s the technique that, for the most part, is pretty atypical of and inconsistent with the tight, polished painting style we normally associate with Salvador Dalí. In fact, not only is most of the work done in a rough and somewhat crude style, but it appears Dalí cut into the paint with the back end of his brush, achieving a kind of skeletal, dried, almost atrophied, or, rather, fossilized look – hence the title of the picture.

But by now we know that Salvador Dalí was always full of surprises, and he returned to a sharper, more meticulous handling of his brushwork in the figure seen through the hole in the rocks, and where we see luminescent color beyond the earth tones of the vast majority of the canvas.

The Fossilized Automobile of Cape Creus may not exactly leap to mind when we think of Salvador Dalí, but it becomes more and more interesting as we give it greater attention.

And this relegation of an automobile to an inferior or improbable position – bogged down by a passenger side door fashioned from a brick wall; depicted as “debris” giving birth to a blind horse; made immobile as it melds with the terrain – can be seen in a number of other Dalí paintings, such as these: 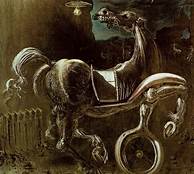 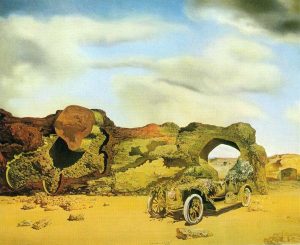 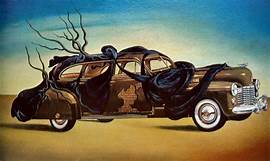