There’s always so much to discover, rediscover, and just marvel at when the subject turns to Salvador Dalí. Whether we’re talking about his paintings, prints, drawings, watercolors, sculptures or other creative projects, there seems to be an endless supply of tasty morsels for us to consume with gusto.

SOMETHING MOST FOLKS NEVER KNEW, UNTIL NOW…

I can’t speak for you, of course, but your humble Dalí historian never knew about this until I stumbled upon it this weekend. Surely you know about Dalí’s collaboration with Walt Disney. Dalí considered Disney a kind of surrealist himself. Dalí was especially taken by Fantasia, as well as other Disney creations. Most notably Disney’s early Silly Symphonies series between 1929 and 1939.

So when it was decided that Dalí and Disney would work together on an animated short, Destino, Walt had the idea of having his special effects master, Joshua Meador, create a surrealist painting as an homage to the celebrated Catalan master. It would be exhibited at a studio reception for Dalí, during his visit to the Disney Studios in 1946.

I’m pretty sure even most of the ardent Dalí aficionados I know didn’t know about this. Until now . . .

The result was Joshua Meador’s The Last Symphony #475, a bold and vigorous 24 in. x 34 in. oil on linen. One imagines Dalí was pleased with it, given the flaccid, soft watch-like condition of those once-rigid cellos. 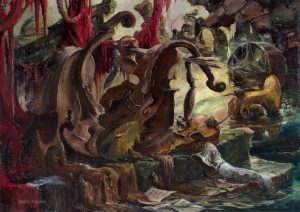 One of this historian/blogger’s favorite Salvador Dalí paintings is “Celestial Ride” of 1957. I like it mostly for the level of amusement it stirs in me. Seriously, can anyone look at this work – a wildly giant rhinoceros with a television set mounted on its side, telecasting a baseball game – and not laugh out loud?

Sports or television — do we know for sure?

But there’s some confusion or disagreement, it seems, concerning this provocative painting. We know it was one of the Seven Lively Arts canvases that Salvador Dalí recreated for theatre impresario Billy Rose, after a fire destroyed his home in Mount Kisco, New York. That’s where those precious original paintings were located after they’d graced Rose’s Ziegfeld Theater in New York City.

However, the Gala-Salvador Dalí Foundation in Spain, which curates a wonderful online Catalog Raisonne of Dalí’s paintings, states that Celestial Ride was representative of “sports” as one of the arts in the Lively Arts series. And, yes, there’s a baseball game being shown on the rhino-turned-TV stand.

But it was also known that, unlike the original 1940s paintings that went up in smoke, by the time the new set was painted, television had become an important new fixture on the landscape of modern society and popular culture.

So it’s the contention of some, including me, that this painting was actually meant to capture the “art” of television. Consider that, in addition to the TV set, we also see several props in the background, all of which appear to be telecommunications-related, including what might be a television studio. Meanwhile, the only sports reference is what happens to be telecast on the television.

Whether this mystery will ever be solved is anyone’s guess…stay tuned (pun slightly intended)! What we know for sure is Celestial Ride is a Dalí that cannot be viewed without creating a smile, and that’s always a good thing.