I recently expressed great joy in finally seeing Salvador Dalí’s appearance on the old Dick Cavett Show, after literally decades of not-so-patient waiting. Dalí was such a colorful, unpredictable, amusing and, yes, seemingly crazy character, that watching him talk and explain his ideas and thoughts in a forum like a TV talk show is a truly special experience.

Dick Cavett did a decent job of handling the wildly unpredictable actions and responses of his surrealist guest, even if at times Cavett’s conduct was a bit on the juvenile side. On balance, I think he followed Dalí’s inscrutable mash-up of English and Catalonian fairly well. He had at least a reasonable grasp of some of Dalí’s ideas and concepts. And he did a respectable job of showing and guiding Dalí’s own descriptions of a series of new prints Dalí had on view at the time – Memories of Surrealism – at a New York gallery. 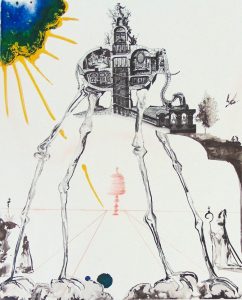 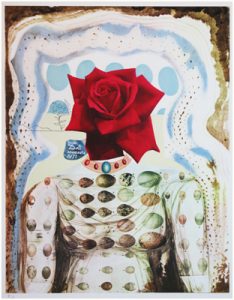 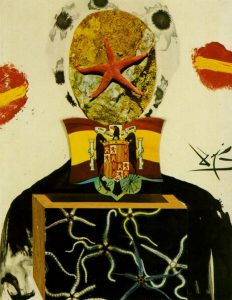 But there are two other clips of Dalí on American television that this Dalí historian/blogger is still sleuthing through sources and resources to find. One I’ve seen once before, flashed quickly in some archival newsreel, while the other I’ve seen only pictures of.

The first is news footage of a press conference Dalí held, presumably somewhere in New York City. Seated in the front row was Harry Reasoner, at the time probably the best-known TV journalist in America, if not the world.

At one point, Dalí was signing his name – or perhaps creating some other spontaneous image – on a blackboard, using a can of shaving cream instead of a paintbrush! He held a razor in his other hand.

In a flurry of frenetic activity, the shaving cream spattered wildly about – and a sizeable clump landed on the expensive double-breasted suit of Mr. Reasoner! The newsman sat motionless, either trying to be cool, or perhaps paralyzed by what had just happened!

I saw this clip only once, so many years ago I can’t begin to guess when or where. But I must see it again, if it would only somehow show up on Youtube or in another forum.

The last missing link in the spectrum of TV appearances of Salvador Dalí occurred on January 29, 1961. That’s when Salvador Dalí shot onto the stage at the Ed Sullivan Theatre in New York. The “shot” was literal. 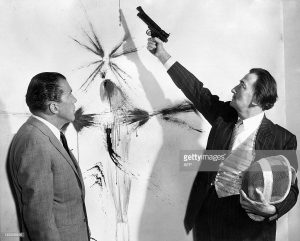 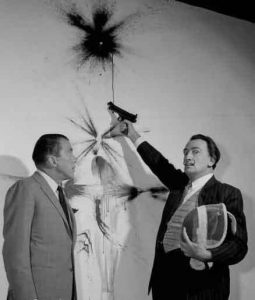 Dalí’s performance art involved him pointing a pistol, loaded with paint-filled capsules, at a large canvas and shooting it to create a rather remarkable image of the Crucifixion. He called this technique “bulletism.” 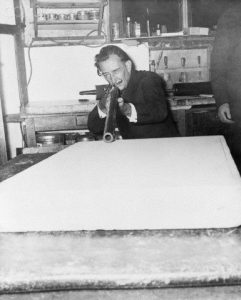 Bulletism of the rifle variety.

The affable Cavett was one thing. But how on earth did Sullivan – a kind of stoic, stone-faced host – react to Dalí’s appearance on his show? How did Sullivan introduce his guest to begin with? What did he say Dalí was going to do? And what did the two say after Dalí shot his way into further fame?

These are questions to which I must have answers. This is a TV appearance of Salvador Dalí I must see. If any reader out there can help, kindly contact me through the Salvador Dalí Society®, Inc.© And if I find it, be assured you’ll see it in this space.