“Enigma” might as well have been Salvador Dalí’s middle name. So much of his mind-bending surrealism was wrapped in a cloak of enigma, with the unraveling left up to us. That’s always been the ultimate fun of it all: trying to understand what Dalí might have been telling us in his diverse and often confounding images, be they paintings, prints, drawings, sculpture, or some other mixed-media expression of “Dalínian” creativity.

Even the titles alone of some of Dalí’s paintings added to the enigmatic nature of them – if, that is, we can even be certain of just what the titles are!

In today’s post, there seems to be some discrepancy in the title of the work I want to briefly put under the microscope. Some sources call it Continuum of Four Buttocks. Others – such as the Gala-Salvador Dalí Foundation in Figueres, Spain – list it this way: Goddess Leaning on Her Elbow; Virgin Formed by Five Rhinoceros Horns. 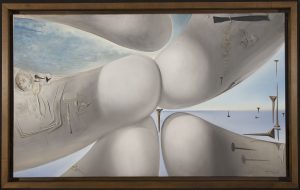 What we know without equivocation is that the 1960 oil on canvas (approx. 30 in. x 60 in.) hangs in the Museu Nacional D’Art De Catalunya in Spain. And that Dalí seemed fascinated by the human buttocks. Countless portraits of women by him show them from the rear, including several of his first model, his sister Anna Maria. Later, of course, Gala posed for a large number of works in which she was seen from behind.

In “Goddess Leaning on Her Elbow,” the elongated forms converging on a nail are clearly meant to be phallic in nature. The upper right one features trompe l’oeil tears, one of which is loosely sown.

These forms were also intended to be rhinoceros horns, with which Dalí was obsessed at the time. He was taken by the fact that a rhino horn is a naturally occurring logarithmic curve, which underpinned the mathematical structure of classically painted works.

Rhino horns, in addition to being phallic, have also been held to be an aphrodisiac, a fact surely not lost on Dalí when he was painting this picture. And in legend, it’s said that a unicorn can be tamed only by virgins, allowing, then, an obvious association of rhino horns with chastity.

At least one observer has suggested that Dalí might have been inspired here by a 1928 Rene Magritte painting called The Voice of the Winds (seen here), though I find any such association weak at best. 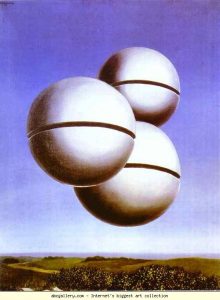 Magritte’s Voice of the Winds

Meanwhile, the nails in the present work might imply Christ’s Crucifixion, but could also carry over a then-current technique of Dalí’s of firing nails at a canvas, using a rifle, to form random images he would ingeniously use as a jumping off point in creating riveting – and enigmatic – works of art.