One of the most unusual paintings by Salvador Dalí – a work most people have probably never seen or even know about, and whose title is another one that seems to confound us – is “Allegory of an American Christmas” of 1943. 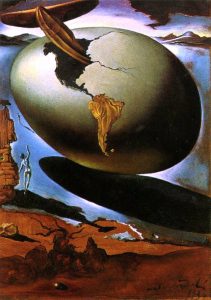 The oil on board is in some respects Dalíesque, yet also looks noticeably different from the Spanish surrealist’s work, especially with respect to the landscape (not easily recognized as Dalí’s beloved Costa Brava) and, in particular, the odd-looking airplane that emerges from the large rock-like egg – or is that egg-like rock?

Salvador Dalí and Gala Dalí were 39 and 49 years old, respectively, when this work was painted – about nine years after they made their first trip to the United States. Dalí had often expressed his desire to eventually travel to America (which he and Gala did by ocean liner, as he had a fear of flying), where he envisioned great opportunity to expand his fame, hone his creativity, and improve his financial success as an artist.

Dalí saw America as a new world, and, on both a figurative and literal level, it truly was for him. Some of his work – including the famed “Persistence of Memory” – had already been exhibited at the Julian Levy Gallery in New York City. Now the world was Dalí’s oyster, he believed, and the plane launching through the huge egg-like form suspended over the landscape symbolized his venture into a whole new world of inestimable opportunity.

The hole in the egg takes the shape of North America, while the representation of South America helps us see the rock-egg as also a globe. Taken as a whole, the image obviously signifies a sense of rebirth and change, as the young Catalan painter and leading exponent of Surrealism was crashing onto the American art scene just as the plane smashes through the airborne egg to explore a new space.

It’s a curious-looking plane at that! It reminds me of a blimp, in some ways, while its ribbed design and bird-like wings give it an almost animal (or vegetable-?) -like quality. Meanwhile, the dark, eerie clouds seem to foretell that something momentous is about to occur, echoed by the rather foreboding shadow cast by the immense egg. Two curious human figures are seen below, while the terrain is rather rough and ragged.

It strikes me as perplexing that a work intended to symbolize a re-birth has a nonetheless dark aura about it.

Why this painting is titled “Allegory of an American Christmas” isn’t clear. Unless we consider that Dalí was using Christmas more broadly as symbolic of birth. This would make sense, as Salvador Dalí was in effect re-born, once he established a foothold in the soil of the American zeitgeist. (The canvas is dated 1934, but it’s likely Dalí erroneously transposed the numbers here.)

The theme of rebirth appeared in two other major works by Dalí, both of which also employed the egg symbolism: “The Metamorphosis of Narcissus” (1937) and “Geopoliticus Child Watching the Birth of the New Man” (1943). 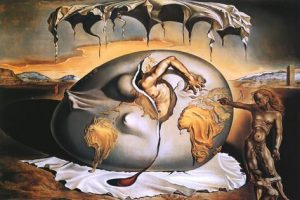