Today I want to look at several Dalí paintings, and a photograph, that have their own special stories to tell, at least for this historian/blogger. One of them is a little naughty, so fair warning!

OK, let’s get straight to the impish, at least as this beholder sees it. It’s the rather recently unknown portrait of Dalí’s sister, Anna Maria – Figure in Profile, 1925 – which was acquired by the Teatro-Museo Dalí in Figueres, Spain after its successful bid for the canvas at auction on March 2, 2017.

My observation doesn’t appear to be shared by others – or publicly acknowledged, anyway – but I feel certain it’s something Dalí intended. Especially given his ambiguous and ultimately strained and estranged relationship with his younger sister, Anna Maria. 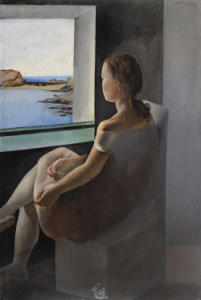 Look again. Do you see what I mean? It’s not only the positioning of her fingers, but the way her wrist is tipped slightly forward. It seems a rather unnatural way one’s hand would be resting on one’s lap while relaxing before a tranquil outdoor view.

I know of two other Dalí paintings in which the same basic hand gesture or pose is impossible to overlook. One is Figure at a Table, 1925. The other is The Hand, 1930, which is unquestionably a picture about Dalí’s exploration of autoeroticism. 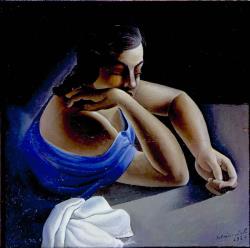 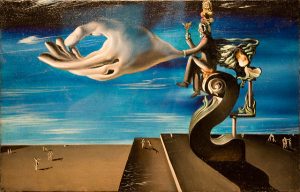 Did Dalí deliberately make this indecorous suggestion to mock his sister? To immortalize the friction between them? You decide.

What’s clear, however, is that this important portrait of Anna Maria — whose somewhat awkward seated position is also noteworthy — is a major acquisition of and addition to the Teatro-Museo Dalí in Spain.

Sex at an Early Age

It’s significant to note that Dalí’s interest in sexually-evocative things took root early in his artistic career. And the nudes Dalí wasn’t shy about painting allow us to embrace some wonderful and very early Dalí paintings we might not otherwise consider. Not because of the nudity, but because I fear we too often overlook the charm and talent inherent in the many fine pictures a young Dalí created long before he became a famous Surrealist. 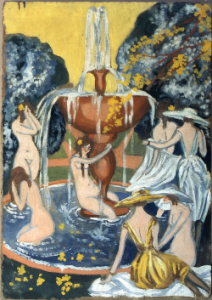 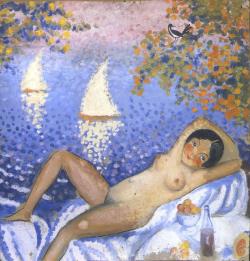 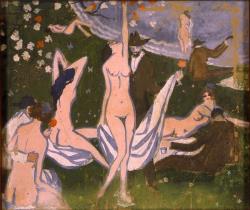 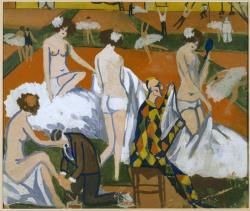 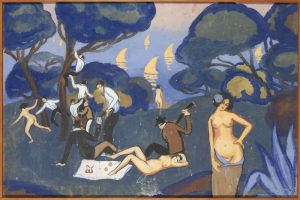 A Flight of Fantasy?

It recently came to my attention that Spain’s Iberia Airlines rolled out a DC10 line of airplanes in 1973, in which two Dalí paintings (reproductions of them, that is) appeared on reversible panels inside the aircraft. They could then be turned around and replaced by a screen for in-flight movies.

While I’ve been unable to find an image of the works themselves, I did manage to locate this photo of the Master inside a DC10, with model airplanes at his feet. 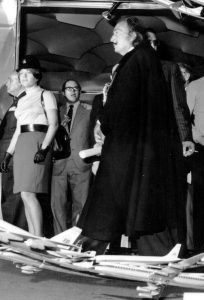 In some ways, it’s something of a surreal scene in itself.

(All images used here under Fair Use provisions for journalistic purposes only.)