When it comes to Salvador Dalí and film, three things leap to mind: the films Dalí made; the scenes he created for films; and the films he appeared in. We think pretty immediately of creative efforts such as Un Chien Andalou and L’Age D’ Or, which he made with Luis Bunuel, and which he appeared in; Spellbound, the Hitchcock thriller for which he created the iconic dream sequence; and Destino, the animated Oscar-nominated film short in collaboration with Walt Disney Studios.

It’s not much of a leap, moreover, to consider footage that was shot of Dalí, from essentially routine broadcast news stories to TV appearances on American TV game and talk shows.

But three pieces of film remain something of a mystery. In fact, I can’t say for certain if one of them even exists! I’m talking, for starters, about the 1952 multi-city tour Dalí made in America, accompanied by his leading patrons, A. Reynolds and Eleanor R. Morse and, of course, the artist’s wife, Gala.

Dalí, a genius at self-promotion, launched a tour through Iowa, Missouri, Texas and Florida under the banner, “Selling Nuclear-Mysticism.” It was a fairly clean break from the Surrealism that made him famous and that up to then had categorized him in the minds of critics and the art-appreciating public as the master of Surrealism. Now he was promoting his art influenced not by Freud, but by Heisenberg.

While I’ve seen a few photos of Dalí on stage with Reynolds Morse, lecturing about his Nuclear-Mysticism, I’ve never seen any film footage of these tour stops. Surely there must have been cameras rolling somewhere, by someone. What a pleasure it would be to see and hear Dalí on this middle-America tour. (If any reader knows where such footage can be obtained, please let us know at The Salvador Dalí Society®, Inc.©.)

Now to another bit of slippery celluloid. I’ve written about the CBS News film footage (or what is ABC?) I saw only once, years ago, of Dalí conducting a bizarre press conference in which he “drew” on a chalkboard – using not a typical implement of draftsmanship, but instead a can of Foamy Shave Cream! (See photo). 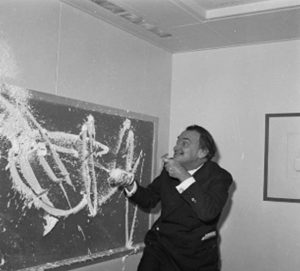 A “lunatic” Dalí paints with shaving cream and makes a mess of a famous journalist’s suit!

Well-known newsman Harry Reasoner was seated in the front row. He remained outwardly stoic, but surely stunned, when – in a flurry of effusiveness – Dalí managed to “accidentally” (?) splatter a considerable quantity of shaving cream upon the doubtlessly expensive suit Mr. Reasoner was wearing.

It was one of those delightful Dalínian moments, and this blogger would like to know how that unique Dalí moment could be viewed again.

Finally, there was about a 15-minute film shot by the then-vice president of Reynolds Morse’s IMS Company of Beachwood, Ohio (his name is Edward). It was taken of Dalí when the artist came to Beachwood (Cleveland) on March 7, 1971, for the inauguration of his museum. I had the privilege of privately screening the 16-mm film in Edward’s home, showing Dalí strutting about the one-room museum, drawing a cross on a woman’s forehead, and other details that frankly have faded from my memory over some 35 years now. 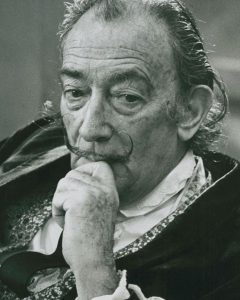 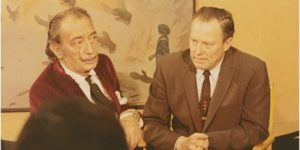 It all reminds me how much there’s yet to discover about Salvador Dalí. Including paintings that may have never been reproduced in books or catalogs, but which will surely come to auction at some future date. We’ll be watching, and reporting.