Salvador Dalí may have anticipated an unlikely 1990s artistic phenomenon by more than five decades! This potentially astonishing fact reveals itself in his “Inventions of the Monsters” of 1937. I’ll get to the prescient details momentarily. 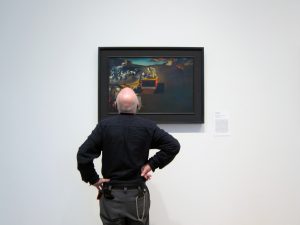 The iconic burning giraffe motif, which appears in a host of Dalí drawings, watercolors and prints, as well as Dalí paintings, is widely understood to be a symbol of war. Dalí himself described it, as it appears in the present picture, as “the masculine cosmic apocalyptic monster.” It’s easy enough to see how such an image became representative of the consuming horrors of war, which often destroys – like the gentle giraffe – innocents as part of what the war lexicon calls “collateral damage.”

“Inventions of the Monsters,” a long-time fixture in the permanent collection of the Chicago Art Institute, Chicago, Illinois, U.S.A., includes a number of other monstrous, nightmarish elements: a masked figure that merges with another to form a white cat’s face. A woman whose head morphs into that of a horse. A clutch of centaur-like creatures in the upper left. It all evokes a sort of disquieting, ominous mood.

Seated at a table is an eerie figure (does it have three arms?) holding a butterfly – a symbol of change, transition, and the transitory nature of things – and an hour glass, as time was running out for a world destined for war. Actually, that “extra” arm might belong to a second figure, since, depending on how you discern the face, it’s either a single face or the profile of one face merged with a second. The ambiguity adds to the unsettling vibe here. 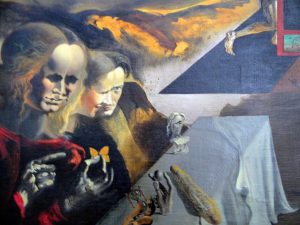 Seated beside this double-faced figure are two clearly recognizable characters – those of Gala and Salvador Dalí themselves. A broken amphora on the ground in front of the table adds to the dismal mood evoked in this nightmarish and foreboding work.

Here’s what Dalí himself had to say, in a telegram he sent to the Chicago Art Institute when he learned they were acquiring it: “…According to Nostradamus, the apparition of monsters is a presage of war. This canvas was painted in the mountains of Semmering a few months before the Anschluss and it has a prophetic character. The women-horses represent the maternal river-monsters…the angel-cat is the divine heterosexual monster, the hour-glass the metaphysical monster. Gala and Dalí together the sentimental monster. The little lonely blue dog is not a monster.”

It’s that little dog that forms the prescient nature of “Inventions of the Monsters,” which I alluded to at the beginning of this post. Could this somehow have been a premonition of Dalí’s, anticipating the oddly popular, iconic “blue dog” series of the 1990s by artist George Rodrique? The notion may seem preposterous. But Dalí’s dog is not only simplistic and sketchy, as was the Rodrique series, but look closely at its faint color…it is, as Dalí telegraphed, blue.