I’m not sure how many Dalí scholars have connected the dots this way, but there’s really little wonder why the theme of death pervaded so much of the surrealism of Salvador Dalí. First, the brother born a couple years before Dalí – whom his parents had named Salvador (!) – died of meningitis.

A picture of the dead child hung prominently in the Dalí family home, near a picture of the Crucifixion of Jesus. A lot to process for the young future artist/genius.

Then, when Dalí was just 16 years old, his beloved mother died of uterine cancer. She was said to be a kind of counterpart to Dalí’s father, in that, while Dalí senior took issue with his son’s politics and personal choices, Dalí’s mother lavished enormous attention on him and was devoted to the “second” Salvador unconditionally. 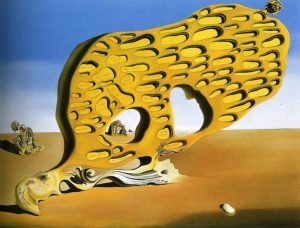 A poignant cry for the artist’s deceased mother.

Dalí was devastated by the sudden loss of his mother, the woman to whom he vowed he would one day become a successful, famous artist. That devastation was memorialized in the superbly crafted but very bizarre surrealist canvas, “The Enigma of Desire,” painted when Dalí was 25 years young.

A large palette-like structure merges with the well-known, ubiquitous “Great Masturbator” head – the head of Dalí – on which a dense mass of ants appears – a symbol of decay and death.

Upwards of 70 elongated spaces (vaginal symbols? Intra-uterine symbols?) are carved into the gold, rocky structure, and in many of them appear the words, “Ma mere” (French for “My mother”). Dalí was Spanish, of course, but he often wrote and spoke in French.

What a pictorial cry of anguish, loss, and desire!

It’s unimaginable to lose the person who generally loves us as no one else does – our mother – at such an impressionable, vulnerable age. You can practically hear Dalí imploring a higher power to bring “My mother, my mother, my mother!” back to him.

Other unsettling details in “The Enigma of Desire” – a woman’s torso seen in a rocky opening in the middle distance; a configuration of anguished and violent activity at left – make this painting a real unvarnished, raw glimpse into the psyche and neuroses of a young Catalan painter destined to international greatness and historical legend.

It is not incidental that the lion’s head in the upper right portion of the painting had long symbolized the aggressive, authoritarian nature of Dalí’s father. While Dalí’s mother is appealed to in practically endless fashion in this almost desperate painting by a young man expressing loss and longing, Dalí’s father – from whom he was now estranged – is accorded the nearly overlooked lion’s head.