I remember,  many years back – sometime in the 1960s, I think it was – seeing a short Associated Press wire service story in my hometown newspaper. It announced a seemingly outrageous new declaration from Salvador Dalí that the controversial Spanish artist was “planning to paint the sky.”
The brief story didn’t expand on such a stupefying promise from the Catalan master, but simply reported that this was the latest and most curious pronouncement from the unpredictable master of surrealism. The event was to take place some months in the future.

In my own way – strengthened by my convictions that, if anyone could achieve the impossible, Dalí could – I believed that, somehow, some way, he meant what he said. He was, in fact, going to paint the sky! I believed him.

It sounded crazy then, and it still does. Yet, cleverly, amusingly, ingeniously – and very publicly – Dalí did just that: he painted the blue, sun-suffused sky over beautiful Port Lligat, Spain.

Dalí’s angel appeared to be painted on the sky!

An undeniably supreme showman and pioneer of performance art, Salvador Dalí had an enormous clear plastic bubble installed on the grounds of his and Gala’s sprawling villa at Port Lligat, on the northeast tip of Spain.

Inside the massive sphere, Dalí was armed with buckets of paint and huge brushes taller than himself. With a crowd of onlookers assembled outside the clear plastic behemoth – including, of course, a phalanx of journalists – the Maestro proceeded to paint a towering angel on the inside of the sphere, splattering and splashing paint with wild abandon, while still managing to render a respectable likeness of an angel many times the size of mere mortals!

From both inside the immense clear dome and out, it really did look like Dalí was making good on his promise. The towering angel against the transparent material appeared to be painted…..on the sky! For all intents and purposes, Dalí achieved what he’d promised in that little newspaper blurb. Not to mention more self-promotion, at which he was an unparalleled master. Watch Dalí painting the sky here:

While Dalí’s sky-painting Happening was something of a mirage, his 1946 oil painting titled Mirage is solidly back in the news, after it became a popular hit with magazine readers in the 1940s, who saw the beautiful work – and two others in the trilogy – help advertise the then-new perfume, Desert Flower.

Recent news stories note that the National Gallery of Victoria in Australia had the picture there on loan. But now they’ve reportedly bought the painting and have launched an effort to have the public fund part of this important acquisition. It’s the first and only Salvador Dalí painting in the country. 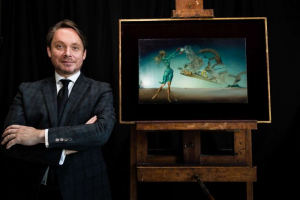 Mirage stays down under in Australia. 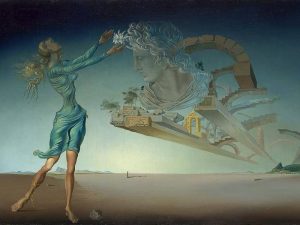 According to reports, the Gallery secured $4 million for the painting, and is now appealing to the public to contribute $1.5 million more.

I hope for the sake of Aussies and many others that the fund-raising effort is a success. I’ve personally always loved Mirage, which was sold at Christie’s auction house of London in 2006 for a price of which I’m unaware – though its estimate was $400,000 – $620,000. That was 12 years ago. Just how many millions it would bring on the auction block today is anyone’s guess.

Too bad Dalí never visited Australia. Would have loved to see how he’d incorporate kangaroos and koalas in his work!