This photo of Salvador Dalí, taken at the Plaza Hotel in New York, reminds me of a charming true story told to me when I was being considered for the position of publicity director of the original Salvador Dalí Museum in Beachwood, Ohio, a suburb of Cleveland (I got the job).

Specifically, I’m focused on the woman in the background of this Plaza Hotel photo, who seems to be looking over as if she’s stunned to realize that, my heavens, that’s Salvador Dalí seated over there!

Back in 1973, a fellow named Edward* was vice-president of the IMS Co. in Beachwood, Ohio – a plastics process equipment manufacturer founded and owned by A. Reynolds Morse. The very same man who, along with his wife Eleanor, amassed the largest collection anywhere of original Dalí’s.

It was actually an annexed wing of the IMS Co. in which the Dalí Museum’s treasures were exhibited – a partial sampling of the private Morse collection, the rest sequestered in their home on nearby Chagrin Boulevard. 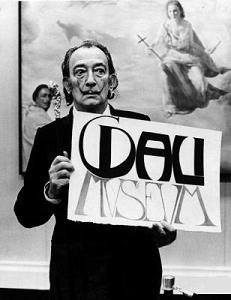 Dalí came to Beachwood, Ohio, for his museum’s inauguration in ’71.

Edward wore two hats under Morse’s presidency: general manager of the plastics business, and a kind of supervisor of goings-on at the contiguous one-room museum. It was Edward with whom I met for lunch one day as part of the interview process.

We dined at a then-popular eatery in Beachwood called The Pewter Mug. I hear it’s no longer there. But at the time it was described by The Cleveland Plain Dealer newspaper as a “mecca for high-powered customers.”

Edward told the story of how he and the Morse’s took Dalí to that very same establishment while Dalí was in town for the March 7, 1971 inauguration of his eponymous museum; Gala remained in New York City. In fact, I’m just now reminded of another little anecdote, which I’ll share presently, before I get to the Pewter Mug story.

Reynolds and Eleanor picked Dalí up in Manhattan and drove him to Ohio via limousine. On the trip to the Buckeye State, Dalí had to stop to “make divine pee-pee,” as he called it. They pulled into a Howard Johnson’s restaurant, and in the foyer was a display case with a particular cookie on which Dalí had his eye.

Upon returning from the restroom, however, Dalí noticed the cookie was gone. “Somebody food my cookie!” the artist bemoaned, in his unwittingly amusing English, where “food” became a verb!

But back to The Pewter Mug in Beachwood. Edward reminisced about the night before the museum opening, where Dalí, the Morse’s and Edward and his wife were out to dinner. A woman at a nearby table was overheard exclaiming to her husband, whose back was to Edward’s table: “Honey! Look! That’s Salvador Dalí!”

“Sure,” the man said to his wife in amused disbelief. “OK, honey, now get serious and let’s enjoy our meal.” To which his wife tenaciously stuck to her story. “No, no, honey, really. I’m serious. It’s Salvador Dalí!”, as she gestured toward the nearby party.

Still certain she was playing some sort of game with him, the man remained focused on his wife and the meal in front of them. Finally, his wife physically moved her husband so he could see for himself. And, by George – or, make that Salvador – his wife was right!” 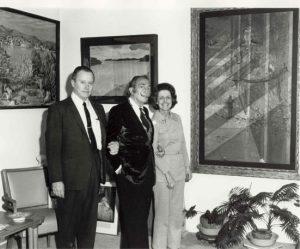 Imagine going out to dinner at some unassuming neighborhood restaurant and finding Salvador Dalí seated at a nearby table. Now that’s a high-powered customer! And it surely must have been a surreal dinner out, which that couple was never to forget!

(Footnote: Edward, now well into his 70s and so far as I know continues to run his own plastics firm in Ohio, shot a 16mm film of Dalí at the museum inauguration in Beachwood on March 7, 1971. I viewed the several-minute-long footage at Ed’s residence. I don’t know if he ever plans to make it available to the general public. *For privacy purposes, I chose not to use Edward’s last name in this post.)

[Images used for Fair Use one-time journalistic purposes only]