I was recently reminded of an intriguing phenomenon – invariably related to the appreciation of art – known as the Stendhal Syndrome.

It’s a condition named after 19th-century French author, Stendhal (pseudonym of Marie-Henri Beyle), who, during his 1817 visit to Florence, Italy, was overcome with emotion. Wikipedia notes that Stendhal Syndrome is a psychosomatic disorder that causes rapid heartbeat, dizziness, fainting, confusion and even hallucinations when an individual is exposed to an experience of great personal significance, particularly viewing art (italics mine). 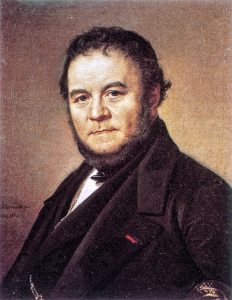 “I was in a sort of ecstasy, from the idea of being in Florence, close to the great men whose tombs I had seen. Absorbed in the contemplation of sublime beauty … I reached the point where one encounters celestial sensations … Everything spoke so vividly to my soul. Ah, if I could only forget. I had palpitations of the heart, what in Berlin they call ‘nerves’. Life was drained from me. I walked with the fear of falling.”

And so I’m transported back to 1972, when I drove from my home in Buffalo, New York to the world’s first Dalí Museum in Beachwood, Ohio, an eastern suburb of Cleveland (a year later I’d become publicity director there).

I think I experienced at least some of the powerful pull of Stendhal Syndrome. For years I had enjoyed these amazing original Dalí paintings only through reproductions of them in books. It seemed most every great Dalí painting was pictured together with the statement, “Private collection: Reynolds & Eleanor Morse, Cleveland, Ohio.” Which is to say, a collection to which the public had no access. And that was true for many years.

Until the Morse’s decided to exhibit most of their unparalleled collection of Dalí art in a wing of their office building. And that’s where I ended up one unforgettable day. A day I’m pretty sure Stendhal put a hand on me.

It was especially evident in what was called the Salon of the Masterworks. This was a corner and main focal point of the one-room museum that contained three wall-sized Dalí masterworks: The Discovery of America by Christopher Columbus, The Ecumenical Council, and The Hallucinogenic Toreador. 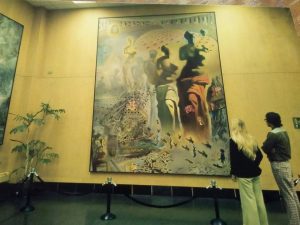 I’ll never forget walking down the corridor and first seeing Toreador from a distance. I was convinced the collar button of the toreador was an actual plastic button – until I walked up to the gigantic canvas and realized it was painted so realistically that it gave the illusion of three-dimensionality.

I literally knelt down on the floor, positioning myself in the corner between The Hallucinogenic Toreador on my right and Ecumenical Council on my left. My normal inhibitions had disappeared. I raised my arms above my head in a kind of Crucifixion-like pose, my fingers curled in the intense manner of Jesus in Dalí’s Ascension of Christ. And my then-wife took a photo of me, though over the years it sadly has disappeared.

The experience of seeing in person for the first time these monumental Dalí masterpieces almost forced me to my knees! I remember an overwhelming sense of satisfaction. The kind that almost makes you feel faint with joy. I might liken it to an intense orgasm – that moment when you feel like you’re going to pass out from the climax of extreme pleasure.

For some, this admission may seem pretty silly. For others, it’s definitely a Dalí thing! They’ll get it. They’ll understand. Stendahl did. So did I.