In Salvador Dalí’s rather famous appearance on the American TV game show, “What’s My Line?”, the celebrated artist was asked if he was a leading man. Dalí responded, “Yes,” to which the show’s host had to dial up a bit of corrective clarification.

But when it came to television – Dalí’s strategic use of it to help weave his persona into the fabric of everyday society, that is – Dalí was indeed a leading man. He knew instinctively how to leverage every form of media (no social media in those days) to his calculated ends – becoming the most famous artist in the world. Knowing full well most artists achieve neither fame nor fortune, and are lucky if they can pay their bills without also flipping burgers.

Dalí achieved both fame and riches, and his “leading man” status on the airwaves didn’t hurt one bit.

Thanks to YouTube, the aforementioned “What’s My Line?” appearance continues to give the world a chuckle, because virtually every question posed to Dalí was correctly answered with an honest “Yes!” As one of the blind-folded panelists declared – humorously but accurately: “There’s nothing this man doesn’t do!” It pointed up just how diverse Dalí’s influence was in so many areas of creativity and culture. Take a look . . .

Dalí appeared twice on the American game show, “The Name is the Same” – in 1954 with host Robert Q. Lewis and in 1955 when Dennis James hosted – and his mustache never looked so enormous! I like it when he briefly notes the style of his latest painting – “The technique is very careful” – while describing it as “one soft watch exploding into eight-hundred and eighty-eight pieces!” Check it out . . .

Dalí uttered his famous, self-deprecating description of his artistic stature when he appeared on The Merv Griffin Show. Griffin asks him who the greatest living painter in the world is. “Dalí!” he boldly replies. “But Dalí is only good because the other painters are so bad!” It elicits the laughter that helped make Dalí a beloved public personality.

I also really like this explanation he gives while on Merv’s show: “My work consists in the meticulous execution of my dreams.” That sums things up quite nicely. Here you go . . .

No doubt the weirdest appearance of Dalí on American TV was on March 6, 1970, when the 66-year-old master was a guest on The Dick Cavett Show. He comes on set clutching a small ant eater, which he promptly tosses onto the lap of guest Lillian Gish. Then, after Dalí launches into an inscrutable description of his artistic aims, a befuddled Cavett suddenly waves his arms toward Dalí, uttering an inane “Woodgie-Woodgie!” It leaves Dalí a little off-center, and I detect a slight flush across his face – revealing that even the outrageous Dalí had the capacity to blush. But it was Cavett who was left the fool! 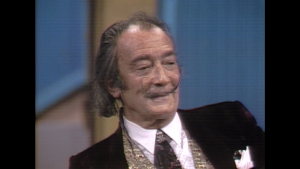 I remember another TV appearance, from the 1960s, I believe, this time not a game show but some kind of news conference. It featured well-known ABC TV newsman Harry Reasoner seated in the front row, while Dalí was making a surrealistic presentation of some sort, using a chalk board and brandishing a can of Foamy shaving cream and a safety razor.

The flashpoint, as it were, came when Dalí – flailing wildly with the shaving cream in hand – spattered a considerable amount of it on Mr. Reasoner’s expensively tailored suit! Reasoner’s look was one of stunned silence, now sporting lathered lapels; Dalí continued unfazed. And Dalí drew a picture of sorts – again using shaving cream – at the end of his appearance on yet another TV game show: “I’ve Got a Secret.”

It was no secret that Dalí appeared in a host of television commercials, too: Lanvin Chocolate in Europe, among others; and such American TV spots as ones for Braniff Airlines, Datsun automobiles, and even Alka-Seltzer. Here’s a clip . . .

Finally, I need your help. The one appearance I never saw, but repeatedly see photos of, was when Dalí was on The Ed Sullivan Show. It shows him and Sullivan standing next to a large canvas, onto which Dalí has shot pellets of ink from a pistol – forming the likeness of a cross.

It must have been a really big show. But I have no idea how one can see it today. If anyone reading this knows, please contact me through The Salvador Dalí Society®, Inc., Torrance, California. www.dali.com or the Salvador Dalí Page on Facebook. Thanks!