The major art auctions have been on fire lately.

The big news, of course, was the recent sale at Christie’s of “Salvator Mundi” (“World Savior”) by Leonardo Da Vinci – the last of the few paintings Leonardo did that remains in private hands. It fetched an out-of-the-stratosphere $450 million. Extraordinary. 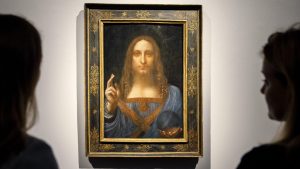 Who has the money to buy such a virtually priceless thing? Come to think of it, there are plenty of billionaires out there, and any one of them could have dropped that cool $450 million the way most of us spend 500 bucks! I’d like to know who now proudly, privately displays that Leonardo. What an exceptional possession to call your own!

The same night the Leonardo shattered the previous record for a painting sold at auction ($179.4 million for a Picasso), a fine 1934 surrealist work by Dalí, “Night Specter on the Beach,” didn’t do too shabby, garnering a nearly $7 million hammer price at Sotheby’s. Obviously that impressive sale was eclipsed mightily by the banner headline-making news of the Leonardo sale. 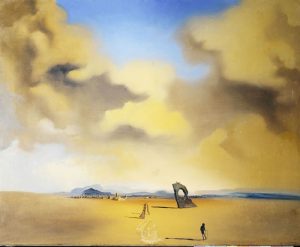 Dalí’s “Night Specter on the Beach”

The Leonardo blockbuster brings to mind something I’ve done fairly often with fellow Salvador Dalí collectors and aficionados: speculate on what a certain Dalí would be likely to sell for, were it consigned to Sotheby’s or Christie’s.

The one we love to speculate about, not surprisingly, is “The Persistence of Memory.” Painted in 1931 and about the size of your average laptop computer screen, “The Persistence of Memory” is certainly the single most recognized and iconic painting in all of surrealism. What’s more, I have no hesitation in stating that, in my view, it is probably the most recognized painting of the 20th century, surrealism or otherwise. 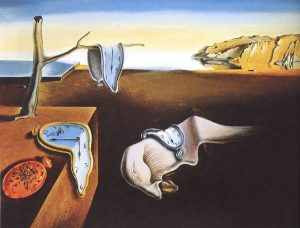 Could this little painting bring the biggest price ever?

Given the relatively small size of the Leonardo masterpiece, what would Dalí’s “Persistence” fetch, were it to find itself off the wall of New York’s Museum of Modern Art and on the auction block at one of the big auction venues? Could it exceed what the Leonardo went for?

I think it could. Not only is “Persistence of Memory” the most universally recognized of all the great catalog of creative work by Salvador Dalí, but the painting is emblematic of the entire movement of Surrealism itself.

No one can consider the surrealist art movement without immediately thinking of Dalí’s little masterpiece, painted when the Spanish artist was a mere 27 years of age.

As a journalist, I’ve sometimes played with “fake news” to surprise and amuse my Dalínian friends. Something like this:

But back to reality: the highest auction price for a Dalí was $22.4 million, when his “Portrait of Paul Eluard” sold at Sotheby’s in London in 2011. It is the most ever paid at auction for a work of Surrealism. Runner-up was “Springtime Necrophilia,” which brought $16.3 million a year later at the same venue.