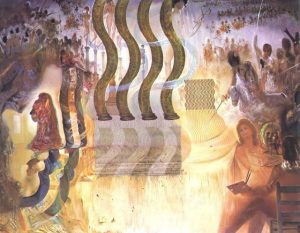 One of Salvador Dalí’s largest and most complex paintings also boasts one of his most verbose titles: “Salvador Dalí in the Act of Painting Gala in the Apotheosis of the Dollar in Which You Can See on the Left Marcel Duchamp Masquerading as Louis XIV behind a Vermeerian Curtain Which Actually Is the Invisible but Monumental Face of ‘Hermes’ by Praxiteles.”

Phew…time to come up for air!

Like another of Dalí’s large canvases – known more tersely as “The Perpignan Railway Station” – this 1965 masterwork is better known as “Apotheosis of the Dollar,” and occupies a special, cordoned-off enclave in the Teatro-Museo Dalí in Figueres, Spain. It used to be owned by Dalí’s first secretary, Capt. Peter Moore and was shown in the Spanish pavilion at the 1964 World’s Fair.

It seems Dalí has put everything into this unusually complicated, even perhaps overly busy, 9 ft. x 13 ft. canvas. Perhaps for the first time anywhere, today’s blog shows pictorially some of the many references that informed this extraordinary picture.

Pop and op art were in vogue at the time, so Dalí employed a moiré pattern throughout much of the central area of the canvas. The large undulating columns – which Dalí has configured to look like dollar signs – were traced onto the canvas with the aid of a back-lighting system that can be seen in the upper-left photo here, taken from a magazine feature. You can also see a male model posing for the image of Hermes by the sculptor Praxiteles. 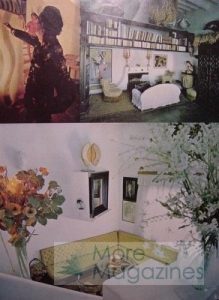 Dalí back-lit the canvas in order to trace tall columns

The helix form of these tall columns is a clear nod to the double-helix structure of the DNA molecule, to which Dalí paid homage two years earlier in his large “Homage to Crick and Watson” (Dalí Museum, St. Petersburg, Florida).

Here’s what the Gala-Dalí Foundation in Spain writes about “Apotheosis of the Dollar”; I’ve threaded relevant images throughout their description:

“In this canvas, just as in his Theatre-Museum, Dalí reflects all the tendencies, myths and obsessions that accompanied him throughout his life….Duchamp on the left-hand side dressed as Louis XIV with Watteau’s lute player over his head: 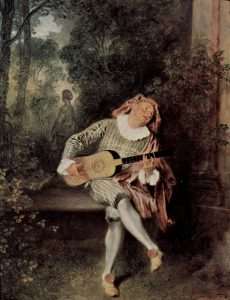 Jose Nieto, the Queen’s quartermaster of Las Meninas, who appears as many as three times. 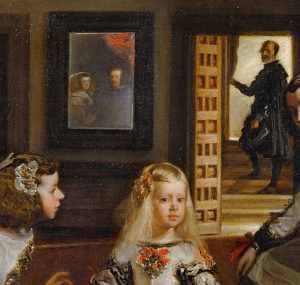 Beside Duchamp-Louis XIV, the profile of Hermes by Praxiteles, who has the figure of Goethe in the shadow of its nose, and in the corner of its mouth, the portrait of Vermeer de Delft. 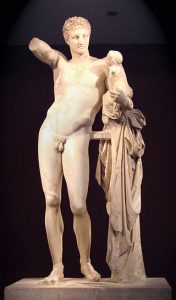 “On the right-hand side, Dalí paints himself, like Velazquez, in the act of painting Gala, at whose side appears the double image of Dante’s Beatriz, who is, at the same time, a kneeling Quixote. Above, we can see Napoleon’s defeated armies, while in the top left-hand corner we can make out the soldiers of the Battle of Tetuan in full force (reminiscences of Meissonier in some and of Fortuny in others).”

On part of the dollar sign image are the words Non plus ultra (“Nothing further beyond”). This, according to Wikipedia, was said to have been inscribed as a warning on the Pillars of Hercules at the Strait of Gibraltar, which marked the edge of the known world. 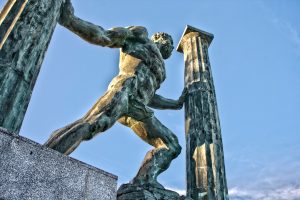 Charles adopted the motto following the discovery of the New World by Columbus, and it also has metaphorical suggestions of taking risks and striving for excellence.