Salvador Dalí could be a man of opposites. He would, at times, say one thing, yet mean something diametrically opposed to what he’d stated. He could, for instance, claim to not like children (he called them “embryons”), yet could be seen with his arm around his godchild. He could say he drank only mineral water, yet some photos show him and Gala at a café with a bottle of beer in front of him.

Dalí could insist that he detested all animals except ant eaters and rhinoceroses, yet be photographed cozying up to man’s best friend. Or monkeying around with a chimpanzee. And, of course, he often had his pet ocelot on a short leash.

He could categorically reject abstract art, yet create a masterwork subtitled Homage to Rothko.

So we shouldn’t be surprised that one of Dalí’s final paintings has a title that seems utterly inconsistent with the work’s extraordinarily ghastly image. I’m talking about Salvador Dalí’s 1980 oil on panel, The Cheerful Horse. 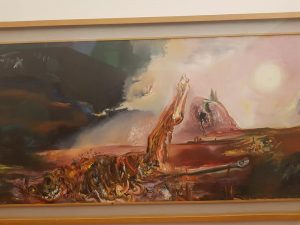 If this horse is cheerful, I’d hate to see what a downtrodden horse of Dalí’s would look like!

I truly thought the title of this work, which Dalí unveiled during a press conference very late in his life — one of his rarest appearances since the world had known he was seriously ill – was The Rotting (or Rotten) Donkey. Incorrect.

Indeed, Dalí did in fact paint a work with such a title – back in 1928. And around the same period he painted The Spectral Cow, which reminds me of the 1980 oil. 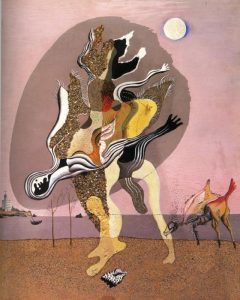 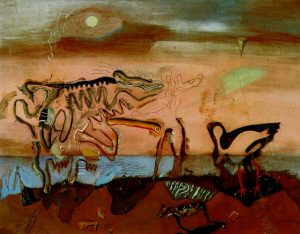 Moreover, the rotting donkey motif, if you will, also appeared in film – in the early cinema classic, Un Chien Andalou, on which Dalí collaborated with French filmmaker Luis Bunuel. 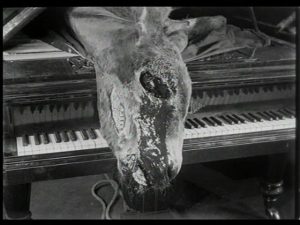 The Cheerful Horse – looking, of course, anything but idyllic – is really quite extraordinary. One has to presume Dalí couldn’t escape his demons during the twilight of his life and career. His thoughts became increasingly preoccupied with death and decay. With calamity. With catastrophe. This is evidenced in a host of paintings he created in the early 1980s, featuring beds and nightstands and stringed instruments swirling about in a maelstrom of angst.

The Cheerful Horse exudes tremendous energy. It’s fecund with emotion. The color palette is somber where you’d expect it to be, then brighter, sunnier, and more cheerful elsewhere – justifying, albeit marginally, the work’s title.

The overall handling of paint reminds me of his work of two years earlier: Allegory of Spring. 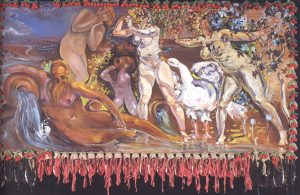 Seeing the photo of Dalí and Gala at that press conference in Figueras, Spain, with this large painting behind them, saddens me. I remember when this event made international headlines. And I felt hopeful that the great man seemed tenacious and indomitable. On the other hand, you couldn’t escape the fact that he looked old, weak and drawn, while Gala looked every bit 10 years his senior. 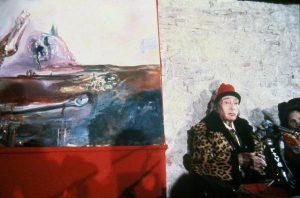 And yet through it all, Dalí brought the world a “cheerful” horse – a description quite the opposite of what appeared on his canvas. Dalí had painted again!

The horse had long symbolized energy, strength and power as it appeared in countless paintings, drawings, prints, watercolors, and sculpture by our dear friend, the divine Salvador Dalí, Marquis de Pubol. In the aged and ailing Dalí mind, his curious horse painting was a cheerful one, even if it doesn’t look that way.

And the fact that Dalí wasn’t quite ready to hang up his paint brushes gave us reason to cheer.