Salvador Dalí painted some of the most extraordinary portraits in history. They invariably paired two distinct forces: Dalí’s idiosyncratic surrealist imagination, and his virtuoso painting technique. His sitters may sometimes have landed themselves in enigmatic landscapes, but their likenesses were captured with precision and clarity.

A case in point is the portrait I want to shine a light on in today’s post – that of Laurence Olivier in the Role of Richard III. I’ve always loved this painting, and I think the main reason is the literal connection of the two views of Olivier by the fusing of his eyebrows and his lips between the two faces. 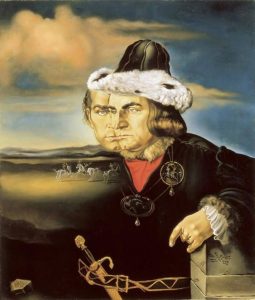 It’s weird and wonderful at the same time!

And it’s a kind of visual metaphor underscoring the transformation of the legendary actor from his real self to his alter ego. So we see a vision of Olivier looking directly at us, while also seeing the profile of the knighted actor in costume for his role playing Shakespeare’s Richard III. 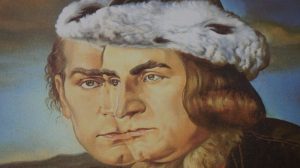 While Dalí was scrupulously realistic in the rendering of the double portrait, he was not about to abandon a trademark surrealist touch in the picture. And so we see Olivier’s body becoming part of the landscape, in which three horsemen cavort, while those ubiquitous ants of which the artist was so fond crawl on the stone wall on which Richard III rests his gnarled hand.

Where on earth are you going to find this remarkable melding of realism and surrealism than in the works of Salvador Dalí!

Working from photographs and sketches, Dalí captured a careful likeness of his subject, and the accompanying photographs reveal the special details of Olivier’s regalia that Dalí faithfully depicted in this 1955 oil. It’s owned by the Teatro-Museo Dalí in Figueres, Spain, and I was thrilled to finally see it in person at a major Dalí exhibition several years ago in Atlanta, Georgia.

The original plan was for the finished portrait to be used on a promotional poster for the Richard III film, under the direction of Sir Alexander Korda, a leading figure in the British film industry. Dalí made careful sketches of Olivier at Shepperton studios in London. 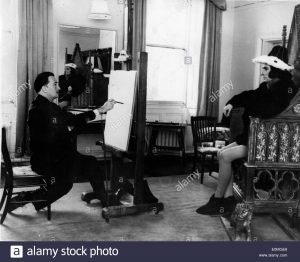 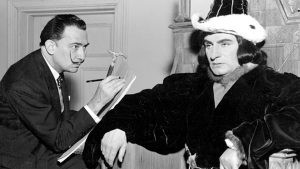 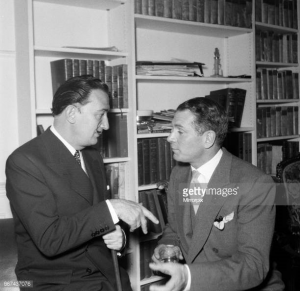 The actual painting was undertaken at Dalí’s studio in Port Lligat, Spain, where he did virtually all his serious work. But fate stepped in and changed a bit of history.

The story seems to vary, depending on whom you hear it from. One account is this: the painting got held up at the Barcelona airport after being deemed too valuable to transport. Korda was, of course, upset over this, but the lucky beneficiary of it all was Olivier, to whom Korda reportedly gifted the precious portrait.

That’s how one account of what happened goes, anyway. What I seem to know with greater certainty is that completion and availability of the painting was delayed — for reasons that aren’t entirely clear — forcing the scrapping of the original promotional poster plan.

Meanwhile, in America, Dalí’s portrait of Olivier ended up on the March 19, 1956 cover of Newsweek magazine.

In time, the somewhat controversial portrait ended up in the hands of Dalí’s secretary-manager Peter Moore, who eventually auctioned it at Sotheby’s of London in 1999. The famous portrait of what many consider the greatest actor ever is now in the Dalí Theatre-Museum in Dalí’s birth town of Figueres, Spain. 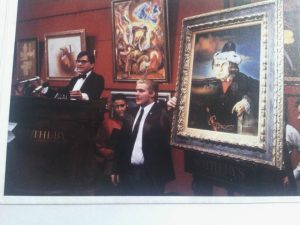 When I think of all the portraits Dalí painted – and there were more than most people know – his portrait of Sir Laurence Olivier stands out in my mind as the single most prominent. 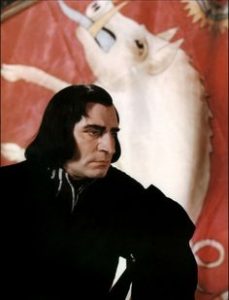 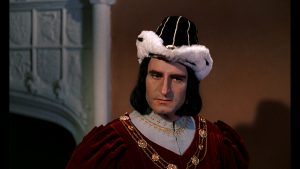 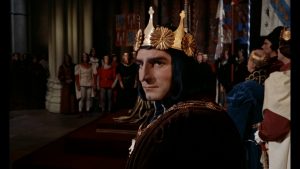