Here’s a different take on the most talked-about, yet possibly least understood of Dalí paintings – his iconic “The Persistence of Memory.”

This small 1931 canvas, painted when Salvador Dalí was just 27 years old, goes unchallenged as not only Dalí’s most universally recognized work, but the most famous Surrealist painting ever.

The soft watches are synonymous with the art of Dalí. They were his pictorial calling card.

Critics, scholars and aficionados have attempted to interpret this remarkable picture for generations – always praising the jewel-like quality of its exquisite technique. Opinions and analyses have spanned Einstein’s theory of relativity; Dalí’s fascination with the hard & soft; the notion that time seemed to stand still in Dalí’s home of Port Lligat, Spain; Dalí’s comment on how society (especially Americans) are slaves to the ineluctable march of time; and so on.

But I wonder if what Salvador Dalí really intended with this picture was simply an early glimpse of his own mortality! Is “Persistence of Memory” something of a death mask? A self-portrait of an ultimately dying man?

Consider three key elements of “Persistence” that could lead one to this conclusion. First, the melted watches themselves. They’re dysfunctional, lifeless…dead.

That point is expressed, secondly, by the swarm of ants on the timepiece that hasn’t succumbed yet, but perhaps will, as ants – a known symbol of death and decay – work toward reducing the rigid watch to the lifeless form of the others. A fly, always present in instances of decomposition, lights nearby. 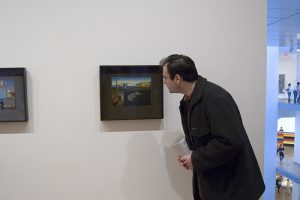 The third element to consider – enormously important – is the fetal-like image lying in the foreground. It’s clearly the form of a human head, featuring a closed eye with long lashes. Most agree this image represents Dalí himself.

What’s more, we know from studies by leading Dalí patron Reynolds Morse and others, that the shape of that head echoes a special rock formation at Cape Creus, along the Mediterranean Sea, that was an important fixture on the landscape Dalí saw daily. It inspired this anguished head-like form to appear in his “Great Masturbator” painting and countless other Dalí works.

It’s a plausible leap to believe Dalí equated that rock formation with his own image – one that was indisputably preoccupied with a lifelong concern: Dalí’s own mortality. “The tragedy of death,” as Dalí himself described man’s final act. Even Freud spoke of a “death drive.”

And what of the perplexing title, “The Persistence of Memory”? Let’s remember what Gala famously said when Dalí first showed her the painting: “Once someone sees it, he will never forget it.” Our memory of it will persist. Could this also be Dalí wishing for his own immortality, counting on the persistence of our memory of him?

Could “The Persistence of Memory” actually be a depiction of Dalí’s own inevitable demise? Might it be his way of sublimating his greatest fear, by painting it symbolically, through flaccid watches that connote the inevitable passage of time? Time that eventually takes its toll on all living things?

After all, ever since the passing of the young brother (named Salvador!) that came before him, Dalí’s entire life has been informed by death.

One thing we know for sure: Dalí attained immortality. That is not open to conjecture.