Almost every person I know has had a similar reaction to Salvador Dalí’s 1955 painting, “The Sacrament of the Last Supper,” when they see it in person: “Damn! It takes your breath away!”

This large 1955 canvas, which has hung in the National Gallery of Art in Washington, D.C., since esteemed art patron Chester Dale donated it, is one of the most painstakingly perfect Dalí paintings you’ll ever see. It is nearly photographic in technique, which – while not everyone’s chalice of tea – is, for this blogger, one of the chief reasons I find it so impressive.

Virtually all Dalí painting share a common quality: a precision of technique that allowed whatever illusion Dalí was serving up to come off with uncanny believability. And make no mistake – painting is an illusion. 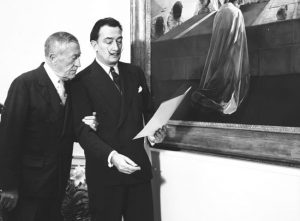 Like a Hollywood movie, where numerous still shots zip by our eye fast enough to make us believe we’re seeing actual movement on the screen (we’re not), so too is a painting a manipulation of form, color, perspective, space and dimension in an effort to make us see something that really isn’t there.

I think this point cannot be overstated. It was Dalí’s draftsmanship, his technical mastery as a painter, that allowed him such success in dazzling us on canvas – not to mention in Dalí prints, Dalí drawings, Dalí watercolors…just about everything Dalí!

So as we consider the breathtaking “Sacrament of the Last Supper,” we see what almost looks like a very large color photograph. But how can this be? We are seeing the body of Christ! The body is transparent! An equally transparent male form rises above the holy repast!

The illusion could only be achieved by someone with the skill of Salvador Dalí.

In my previous post about another religious Dalí work, “Ascension,” I spoke of what I call the “Dalí difference.” His inimitable way of seeing the world far differently from the rest of us. His special way of imagining a subject through an entirely different lens.

The present painting is another example of this. Dalí’s aim was not to depict how the actual Lord’s supper must have looked (thus deviating from Da Vinci’s famous rendition), but instead to glorify the perfection and unity of the sacrament itself.

So he places the iconic event within a dodecahedron – a 12-sided geometrical figure that symbolizes harmony and perfection. The number 12, of course, also represents the 12 Apostles, as well as many other worldly truths: the 12 months of the year; the 12 signs of the Zodiac, the 12 Tribes of Israel.

Despite it all, some folks have disparaged the famed painting. I’ll never forget when, for a period of time, it was actually hung on an obscure wall in the Gallery gift shop! When I inquired of a desk attendant why such a world-famous masterpiece was quartered in this manner, she said, “If I had my druthers, it would be put in the basement!”

You can’t please everyone.

But Dalí just about did, with his “Sacrament of the Last Supper.” Because it’s fact that more reproductions of Dalí’s painting are sold in the National Gallery’s gift shop than any other work of art. And I think we can be confident it will never hang in the basement.