At age 27, a young Salvador Dalí was smack-dab in the throes of Surrealism, and one of the best examples of his thoughts and visions transferred to oil on canvas is the important 1931 painting, “Six Apparitions of Lenin on a Piano.” 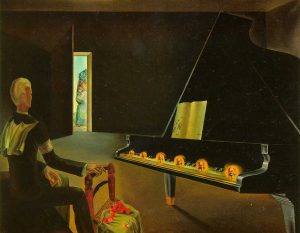 Unlike many confounding titles assigned to Dalí paintings, Dalí drawings and other works, this picture’s title tells us precisely what we’re seeing – but the question is, “Why?”

Dalí has here trivialized Russian leader Vladimir Lenin, taking a sardonic and antithetical turn against the Surrealists, who favored the Communist Party. In an extraordinary statement, Dalí was quoted, “Marxism was no more important than a fart, except that a fart relieves me and inspires me.”

So the great and powerful Lenin is, thanks to Dalí, reduced to little glowing heads – six of them – neatly spaced along the keys of a piano. They really do capture the sense of an apparition! Ironically, for me anyway, they actually lend a kind of charm to the work, despite Dalí’s intention to trivialize the Russian figure.

“At sunset,” Dalí had explained, “I saw the bluish shiny keyboard of a piano where the perspective exposed to my view a series in miniature of little yellow phosphorescent halos surrounding Lenin’s visage.” It’s always a treat to read Dalí’s own explanations of such things.

Much of Dalí’s dream-like imagery during the heyday of his surrealism of the 1930s owes as much to what he actually observed in his surroundings and experiences as it did to his dreams. The piano, for instance, appears frequently in various Dalí pictures, usually in bizarre fashion, such as the present case, or in pictures like the provocatively titled canvas, “Skull Sodomizing a Grand Piano.” 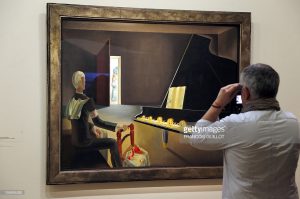 But the instrument actually did figure into young Dalí’s daily life, since the Dalí family was friends with the Pixtos, a musical family where al fresco concerts in Cadaques, featuring piano playing, were common. Moreover – and on a less cheery note – there was a piano in the home when Dalí was growing up, upon which Dalí’s father kept a dubious book picturing the horrible ravages caused by sexually transmitted diseases. This unfortunate fixture in Dalí’s upbringing is said to account for his fear of sex, or at least his ambiguity about it.

In “Six Apparitions of Lenin on a Piano,” Dalí supplants notes on the music sheet with his oft-seen swarming ants, a symbol of decay and death – sensibilities never far from Dalí’s mind all his life.

Meanwhile, when Dalí was a young boy, he had a tiny space set up outside the family home, and had painted cherries on a chair that family and friends had remarked looked very precocious for the young Salvador. That memory recurs for him in the “Lenin” painting – cloaked in a distinct darkness, disrupted only slightly by a sliver of daylight seen through a distant door.

If surrealism was in part about painting one’s dreams, this work captures that notion in a quintessential manner, for so much of the dream world involves dark, mysterious, disquieting and perplexing spaces.