Given the absolute stunner of a presidential race just concluded in America, let’s look at Salvador Dalí’s depiction of U.S. President Abraham Lincoln, in a work commonly referred to as the “Lincoln” painting, or “Lincoln in Dalí-Vision,” but whose actual title is “Gala Contemplating the Mediterranean Sea which at a Distance of 20 Meters is Transformed into the Portrait of Abraham Lincoln (Homage to Rothko),” 1976.

You’ll note that year was the U.S.A.’s celebration of its bicentennial, and it made sense that Dalí would pay homage to the nation that in effect served as his second home for so many years.

It’s known that Dalí was first inspired to choose this subject after seeing a computer-quantified image of Lincoln in this basic fashion – comprised of monochromatic cubes loosely assembled, but which invited the mind to “fill in” the missing space to allow a discernment of Lincoln. The image appeared in Scientific American magazine, a favorite read for the inquisitive, scientific-minded Dalí. The optical science behind it all intrigued him.

Dalí didn’t care much for purely abstract art, but he liked using abstraction as a jumping-off point, then developing a more representational work. Such is the case here, gaining some inspiration and nodding to popular abstract-expressionist Mark Rothko, who popularized large square and rectangular shapes and a color-rich palette.

No surprise, of course, that Dalí’s wife Gala would literally be front and center, seen nude from behind contemplating the sea onto which she gazes through a cross-shaped window, above which we find reference to Dalí’s iconic religious masterpiece, “Christ of St. John of the Cross.” This time Christ’s head does double duty as the blinding sun as well. 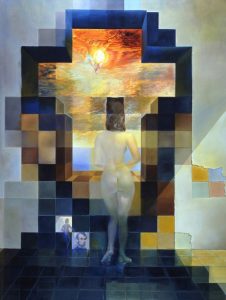 It still surprises me – because it’s uncharacteristic of the enigmatic Dalí – that he actually included, in the lower left of this large canvas, a small image of Gala pointing toward a more easily discerned image of Lincoln. Thanks, Salvador, for being so helpful here! 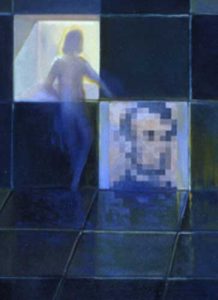 As many times as I’ve looked at reproductions of this very popular Salvador Dalí painting, I must say I was delightfully surprised at how truly vivid and spectacular it is in person; no reproduction does it justice. It hangs in the Salvador Dalí Museum in St. Petersburg, Florida.

Some works are consistent crowd pleasers, and Dalí’s “Lincoln” clearly is one of them. Museum-goers tend to have great fun finally seeing the Lincoln portrait. Often they need to squint their eyes to flatten the depth of field in order to bring the portrait into focus. Or, alternatively, they’re advised to step back – just as Dalí instructed in the picture’s title – before the iconic U.S. president’s image appears out of nowhere.

A Dalí print of this colorful and impressive image has remained a popular one, just as this oil is a big hit at the St. Pete Dalí Museum. A similar though slightly different version of this work – painted on photographic paper, oddly enough – is in the collection of the Teatru-Museu Dalí in Figures, Spain.