Certain paintings, drawings, prints and other creations by Salvador Dalí have something about them that’s a bit of a mystery to me. They’re works that not only grab ahold of me, but seduce me into coming back to them time and again, insisting that each time I return I discover something new.

Do you ever have this kind of experience with certain Dalí’s? It’s really quite exhilarating! It’s art that not merely speaks to you, but almost literally reaches out, grabs you by the collar, and tenaciously draws you in with an ineffable sense of awe. Dalí is just so damn exciting!

I’m having one of those experiences right now. As I write this.  As I again contemplate the extraordinary painting, The Madonna of Port Lligat of 1950.

At the time, the 46-year-old Dalí considered it his greatest achievement to date. I loved the photo that ran in LIFE magazine when the immense canvas was delivered to New York’s Carstairs Gallery. It showed Dalí with his hands clasped in utter self-satisfaction as he gazed up to watch the giant canvas being hoisted to the 6th floor gallery; it was too large to fit on the stairs or elevator. Dalí proclaimed it was all “like childbirth!”

What I love about a painting like this is how it can be enjoyed in whole or in part – on a kind of macro- or micro-level. The overall impact owes, in part, to its sheer size. It looked commanding indeed when I finally saw the original in the Dalí: The Late Years exhibition at the High Museum of Art in Atlanta, Georgia, in 2010 (though I lamented it was behind Plexiglas). 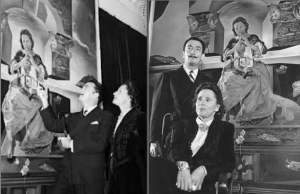 In more specific terms, the portrait of the auburn-haired Christ child – for which Juan Figueres, a 6-year-old from Cadaques, posed – is stunning. Close-ups of this central portion of the picture reveal spectacular detail in Gala’s embroidery and the Eucharistic bread seen through the transparent cut-out through both the chest of the Child and the Madonna. 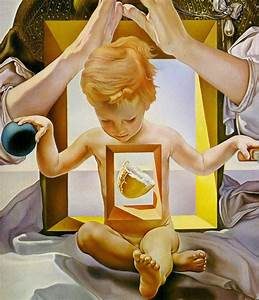 One detail that’s always intrigued me is the cuttlefish bones seen at left in The Madonna of Port Lligat. Cuttlefish are remarkable sea creatures that change colors and emit electronic-like changes in their appearance. In Dalí’s world, those changes became, at the right side of the painting, angel wings from which the image of Gala morphs. 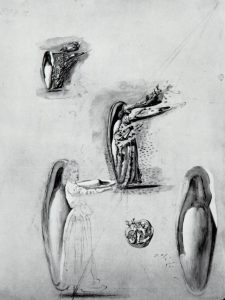 As Dalí’s first major Nuclear-Mystical work, everything in The Madonna of Port Lligat floats in space, representing then-new discoveries in nuclear physics – notably findings about the discontinuity of matter. 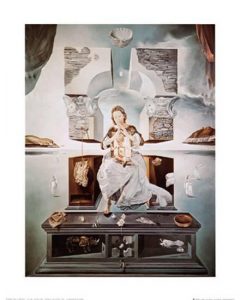 Nothing touches anything else.

Alas, Dalí popularly symbolized his fascination with atomic physics and mathematics – in particular the logarithmic curve – via the horn of the rhinoceros. And here, in the cubicle at the bottom of the painting, is the first appearance of the animal, whose unique horn would be the basis of a recurring motif in many Dalí works to follow.

Three other details in this large masterwork recall three other Dalí paintings: the basket of bread to Gala’s lower left; the design to the right of the rhinoceros – the same as that seen in Dematerialization Near the Nose of Nero; and the dematerializing face to the right of that, seen in the 1967 work, Future Martyr of Supersonic Waves. 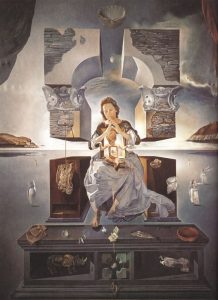 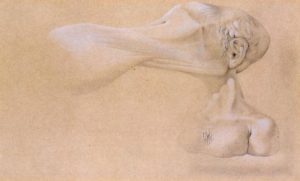 Taken as a whole, or examined in its seemingly endless details — such as the piece of hanging cork, seen here in Dalí’s study for it — 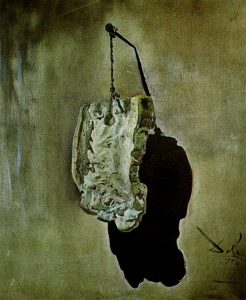 The Madonna of Port Lligat is another giant achievement from the studio of Salvador Dalí.