My friend, Dr. Ellliott King – a widely respected Salvador Dalí expert – has just returned from a very special trip to Japan, and now he finally got to check off a major bucket list item: seeing in the flesh the remarkable Dalí masterwork, The Battle of Tetuan.

This gigantic 1962 oil on canvas is one of Dalí’s most complex and powerful images, chockablock with references to history, numerology, and mystery. The surrealist touches are here, of course – the huge flying horse, the elongated Ghost of Vermeer of Delft leg, the appearance of a general’s arm brandishing a sabre. 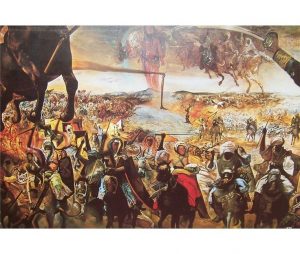 The Battle of Tetuan was fought in 1860, near Tetuan, Morocco, between a Spanish army sent to North Africa and the tribal levies which at the time made up the Moroccan Army. The battle was part of the Spanish-Moroccan War of 1859-1860.

Battle of Tetuan by Mariano Fortuny, to whom Dalí’s version is in homage.

I recall several conversations with Elliott King about how I, too, saw Battle of Tetuan in person, back around 1992, at Christie’s auction house in New York City. It sold that night for upwards of $2 million.

Unfortunately, the painting was hung in an anteroom through which auction guests had to pass in order to enter the main room. The massive painting was hung on a left wall, and a very narrow passageway was set up between the wall and a guard rail. As a result, you had to look up, straining your neck in order to see the work. You actually got the feeling you were being trampled by all those horses! 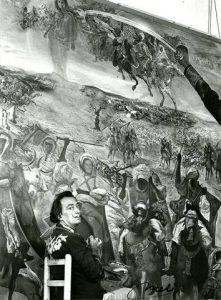 This made it next to impossible to view the work properly, given the low and restrained vantage point. Many people filed down the entranceway to the auction space completely unaware that the great Dalí picture was there at all.

Indeed, I didn’t realize it myself at first. When I did, I’d wished there’d been an opportunity to study it from a proper distance. I would rather have examined and enjoyed the painting all evening than attend the sales activity in the adjoining room (albeit I did get to meet singer/song writer Carly Simon, who was attending the auction).

Here we see a photo of Dr. Elliott King, his wife, and others at Japan’s Morohashi Museum of Modern Art in Fukushima, with the Battle of Tetuan as a dramatic backdrop. The museum owns a number of additional Salvador Dalí paintings of exceptional importance, including Anti-Protonic Madonna. 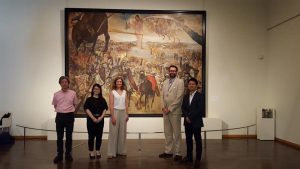 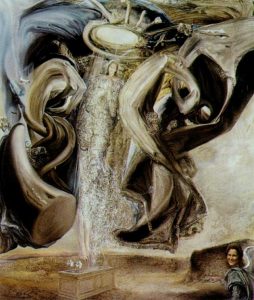 I’ve yet to see Anti-Protonic Madonna in person. From the excitement Elliott has expressed in a brief Facebook note (he has not returned from Japan as of this writing), it is much more colorful and far more spectacular in the flesh than anyone can imagine from seeing simply a book reproduction. 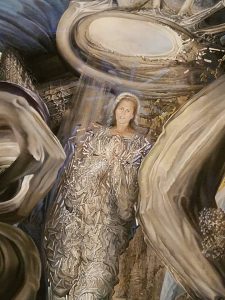 In an upcoming blog post, I hope to talk more about Dr. King’s trip to Japan’s world of Dalí, and in particular his take on both Battle of Tetuan and Anti-Protonic Madonna.