Perhaps there’s a bit of irony in this, but in my view some of Salvador Dalí’s very best creations were executed for unabashedly commercial assignments. A well-known example are the wonderful mixed-media pieces he produced for Bryan Hosiery. And this not very well known but spectacular oil painting about which I’m writing today: “Mirage” of 1946. 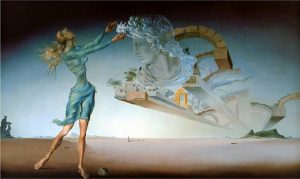 The irony comes from the fact that many people – during Dalí’s heyday and even continuing today – criticized the master of surrealism for being a sort of “master of commercialism.” But I absolutely love what Dalí explained about that. He said that most people work so they can get money – while he “got money” so he could work!

What he meant, of course, is that the lucrative and plentiful commercial assignments that came his way allowed him the financial freedom to spend long, long hours painting his masterpieces – unencumbered by worries about how the utility bills would get paid!

One such commission was from Shulton Company in the mid-1940s, in which Dalí was paid to produce not one but three separate oil paintings that would appear in magazine ads to promote Desert Flower perfume. It was known as the Desert Trilogy (the other two canvases were “The Invisible Lovers” and “Oasis”).

It seems clear that, just as a mirage is an illusion, so too might love and seduction and sex appeal be largely illusion – sometimes created by the olfactory allure of distinctive perfume!

Everything about “Mirage” is, well, mirage-like: is it there, or is it just imagined? Is it fantasy? Reality? A trance-like state? The beautiful girl, dressed in a gorgeous blue-green outfit adorned with strings of gems, looks like something out of a dream. Her outstretched arms behold a Greek god-like figure, from whose forehead sprouts a desert flower, according with the product’s brand name.

The extraordinarily deep perspective – composed of strange stone buttresses and arches and classical ruins – might suggest a kind of magnetism, implying that when a woman wears Desert Flower, men will be drawn to her like never before. A plausible interpretation, anyway.

The woman is as elegant as a Roman goddess, her sinewy right leg encircled by pearl-studded lacing that is also seen around her chest, tiny waist and curvaceous hips. Her curly, flowing tresses echo those of Apollo (or whomever he is) – all adding to the surrealist aura of this desert mirage.

The flat, relatively deserted plain over which the imaginative elements appear is doubtlessly inspired by Dalí’s beloved Spanish countryside – always an inspiration in so many of Dalí paintings, Dalí prints, drawings, and watercolors.

Blue and gold were favorite colors of Salvador Dalí and “Mirage” is a quintessential example of how that color palette resulted in a truly lovely painting – one that very few people are familiar with, but which, in this blogger’s view, is among his finest efforts at the easel. The painting is as tight and sharp and precise as any Dalí painting – commercial or inspired.