I’ve always been impressed by Salvador Dalí’s “Mountain Lake” of 1938, even if, for much of my decades-long study of Dalí’s life and work, I never quite knew why. 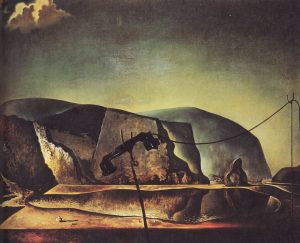 Surrealism is a fascinating arena in which to navigate. Strange imagery can speak to you, even if you have little or no clue as to what it might mean. After all, surrealism was very much about exploring and transcribing one’s dreams onto canvas. And are dreams ever orderly? Ever neat and tidy? Do they ever quite make sense? Aren’t they always a convolution of space and time?

That said, we also know that Salvador Dalí invariably connected his surrealist visions to real-world events, if not personal thoughts and experiences, including his many preoccupations with sex, death, decay, and other phenomena. And although Dalí considered himself largely apolitical, he didn’t shy away from making pictorial references to seismic world events, such as war and impending war.

The telephone receiver in “Mountain Lake” always riveted my attention, in part because of its old-fashioned design (obviously state of the art in 1938, however); its incongruity in a scene showing a lake and mountains; its elevated position, thanks to the tall supportive Dalínian crutch; and the snail slithering on the crutch just below the phone.

Who but Salvador Dalí would disturb a perfectly placid, normal-looking landscape painting by interjecting a most unlikely element like a telephone teetering in the bifurcation of a crutch!

But it is widely acknowledged, in several paintings around this same time period – such as “The Enigma of Hitler” (1937) – that the telephones in these Dalí paintings symbolized the important and fateful communications between Neville Chamberlain, the British prime minister; and Adolf Hitler, as ill-fated attempts were made, telephonically, to avert war. 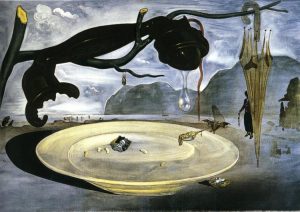 Dalí seemed to be keenly aware of the war’s imminence and, in the broken telephone cable draped over a second crutch, we can deduce that Dalí was representing the breakdown in communication between the two powers and the waning of hope for the avoidance of hostilities.

The snail might be interpreted as the slow-moving efforts to stave off the inevitable, while the overall color palette in this picture paints a rather disquieting sense of eeriness, even though there is nothing in itself here that one would consider sinister.

Dalí seemed to have been almost unable to help himself when it came to his penchant for double-imagery. Little wonder, then, that the lake itself is also an enormous fish, with ripples in the water serving as the fish’s gills, while a rock’s shadow cast on the fish makes up an additional detail of its exterior anatomy.