Sometimes we get so focused on the large paintings, intricate prints, and masterful drawings of Salvador Dalí that we tend to overlook some of his less prominent yet still very revealing works.

Today I’m putting the spotlight on a small oil on canvas (approx. 10” x 14”, private collection), that in a sense is profound in its simplicity. And relevant in the emotion it evokes, as unfortunately many people this time of year feel a sense of isolation. 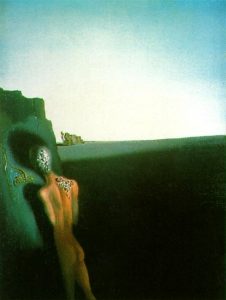 This was the period most every critic and scholar of Dalí’s life and work says was the artist’s most fertile, creative, and important in his prolific career. I’ve acknowledged that the 1930s were indeed the heyday of Dalí’s best surrealism – but by no means necessarily the only period in which Dalí’s talent soared.

In fact, I personally think the period beginning in the late 1940s and running into the mid-1970s was far more inventive. But that’s a discussion for another time.

Solitude presents a curious male figure who seems to be practically absorbed by the rock formation against which he leans. Part of his form morphs into shells – a kind of prop often seen in Dalí’s works, such as in several important works around this same period: The Great Masturbator, The Lugubrious Game, and Illumined Pleasures, for example. 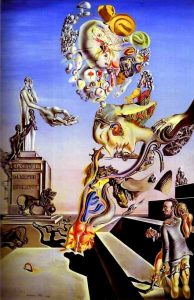 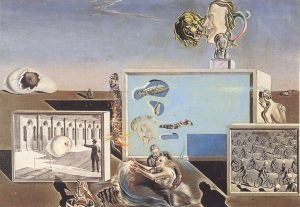 Indeed, virtually the same male figure similarly positioned is seen on the right side of Illumined Pleasures – another of countless examples of so-called Dalínian Continuity, where Dalí intentionally linked many of his paintings in a thread of similar elements and objects of his own obsessions.

The shells are consistent with Dalí’s lifelong fascination with the hard and soft; in this case, the hard outer shells of shell fish protective of the soft inner form.

Perhaps most significant about Solitude is the title itself; that is, the sense of solitude the canvas exudes. There is nothing on the land except for a distant rock, behind which a ghostly human figure appears to tentatively present itself. The land itself is painted in a color that makes it look almost more like sea than land. And the sky has absolutely nothing in it.

Solitude was in fact a state of being with which the young Dalí was decidedly familiar, as he spent many hours alone, thinking, reading, painting, dreaming and, alas, self-pleasuring. He’s quoted as saying he was worried that his relationship with Gala would “annihilate my solitude.”

One detail I personally find interesting is the kind of delicate gold art nouveau-like ornamentation on the rock, just above the man’s left shoulder. It seems to pick up the morphology of the shells imbedded in the figure’s shoulder, yet it creates a separate curiosity all its own.