We know quite a bit about what Dalí painted, but not so much about how he painted. So I was pleased to recently come across information provided by the Tate Museum in London about its 1936 painting, Forgotten Horizon, and how master Dalí painted it. 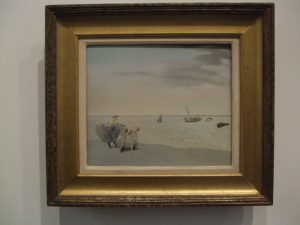 The work is small, just a little larger than an 8” x 10” photograph, and was one of a series of paintings Salvador Dalí did on wood panels, depicting the beach at Rosas on the Costa Brava in Spain.

Forgotten Horizon portrays that beach featuring “alluringly posed dancers meant to stimulate the imagination and subconscious,” as a Tate statement describes it. The museum did a technical analysis, revealing that, while Dalí’s technique was based on tradition, he also melded methods and materials in a manner all his own.

According to the Tate analysis, Dalí first painted the setting of the sky, the water and the sand over white priming, then added the dancers, which, as the Tate puts it, “seem to float in the landscape.”

Tate specialists conducted a detailed analysis of the head of the far left figure in the group, employing raking light – a bright light directed from the side to show up details of painting technique. Said the Tate: “…the texture and energy in the paint application that’s apparent in this detail belies the flat, calm appearance of the work as seen from a normal viewing distance.” 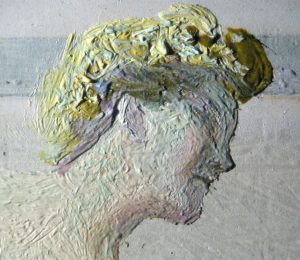 The source of the dancers is reportedly a now-lost postcard. Using infrared light analysis, Tate specialists determined that Dalí was able to transfer the postcard image to the panel of wood, outlining the figures and facial details.

High-technology helped uncover Dalí’s sketching: the Tate’s infrared camera “provides a series of small images which are pieced together into a mosaic,” a document notes. “Infrared light penetrates the upper layers of paint and is either absorbed by the black media used for the under drawing, such as pencil, ink, or diluted black paint, or reflected by the white priming layer. This contrasting absorption or reflection is translated into a visible black and white image, which reveals Dalí’s preparatory outlines.”

As a result of ultra-violet light analysis, Tate conservators were able to conclude that “Dalí either used natural resin on its own or mixed with linseed oil paint to create a more liquid media which could be laid down easily and fluidly with a very small brush.”

The central figure is said to be Dalí’s cousin, Carolinetta, whom Dalí featured earlier in his 1934 painting, Apparition of My Cousin Carolinetta on the Beach at Rosas. 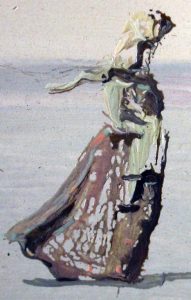 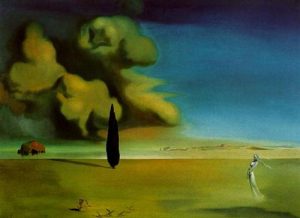 The Tate’s microscopic analysis and magnified details illustrated its fluid quality. “Dalí,” the museum notes, “had a sure hand as he laid the paint on the surface. There is not a single mislaid stroke or error in his application.” 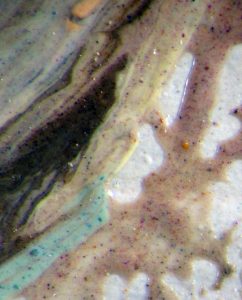 Interestingly enough, the same trio of dancers showed up in 1935 in Dalí’s Puzzle of Autumn (collection Salvador Dalí Museum, St. Petersburg, Florida). However, in this earlier version, the order of the dancers is reversed; the one on the extreme left in Forgotten Horizon is on the extreme right in Puzzle of Autumn. And their outline, as a group, is the same shape as the “puzzle pieces” in the Puzzle of Autumn work (were you aware of that before now?). 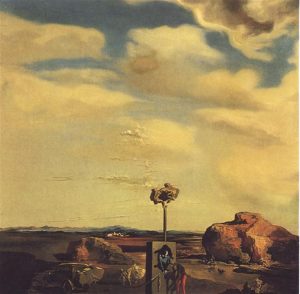 All this reminds me how I’d love to know so much more about how Dalí went about creating his paintings, not to mention his drawings, prints, and works in other media. Not only the technical aspects of their rendering, but the thought process that went into his works – most especially the highly complex, walls-size masterworks.