Your dali.com blogger today is keeping it “local” with my focus on a wonderful picture Salvador Dalí painted in 1938: “The Transparent Simulacrum of the Feigned Image.” The work is the one and only Dalí oil in the permanent collection of the Albright-Knox Art Museum in my hometown of Buffalo, New York – and it’s a terrific example of surrealism at its finest. 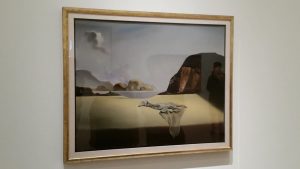 Not surprisingly, it’s one of the very first examples of original Dalí art I’d ever seen. In fact, as I think about it, it surely must have been the first Dalí painting I’d ever seen in the flesh, given its easy accessibility just 15 minutes down the road from my home.

What I remember more than anything else, upon first seeing this painting, was how buttery smooth it looks. Everything in it is photographically precise. And the predominant sandy beach foreground almost literally looks like butter. The technique is flawless and soft, precise and radiant. It makes you feel like you want to touch it.

It reminds us that Dalí was a gifted painter whose Renaissance-like technique allowed him to make plausible even the most preposterous figments of the wildest imagination. “Hand-painted color photography” indeed!

Dalí was a master at titling his works, and “Transparent Simulacrum of the Feigned Image” gives us an unambiguous clue as to what this picture is about. It has a wonderfully effective dream-like vibe to it, doesn’t it? From the furtive floating head at right – an image of Dalí’s wife, Gala (seen positioned and portrayed in the exact same way in his “The Endless Enigma,” also of 1938, and which also features the table and fruit bowl motif) – to the sharp, exacting technique that’s consistent with the vivid nature of most dreams.

Dalí’s penchant for double-imagery again rears its eye-fooling head, this time in the middle distance. Do you see a mountain range whose foreground offers up a body of water that spills out onto the expanse of sandy beach? Or, instead, do you see pieces of fruit in a bowl?

Moreover, what about that beach? Is it a beach? Or is it a table, over which part of an abandoned white cloth hangs?

For many years I’ve enjoyed seeing this beautifully painted canvas, my eye inevitably drawn to that realistically rendered but somewhat enigmatic cloth. What exactly is it doing there? Is it merely a random item, and thus part and parcel with the phenomenon of dreaming? Perhaps.

But some observers have pointed out that the cloth approximates the shape of a bird: its wing flopped over the beach’s (table’s) edge, its beak pointing to the west. Do you see it? Do you buy it? Or is this merely someone thinking he or she sees something that wasn’t actually intended? Personally, I think any resemblance to a flying bird is purely coincidental.

Indeed, Dalí was told often by fans that they saw this, that, and the other in certain details of his works. Often he’d reply, “You ees having one very good idea – but Dalí nevair theenk of it!”

Is it a bird? Is it a silk cloth? Is it something else? Oh, the joy of this man’s art! Be it a Dalí painting, a Dalí print, a Dalí sculpture, or works in other mediums. As Dalí used to quip, “Never a dully moment with Dalí!”

Here’s Dalí’s “Endless Engima,” in which you can see the same floating head of Gala at right, along with a table-like foreground and similar fruit dish double-image: 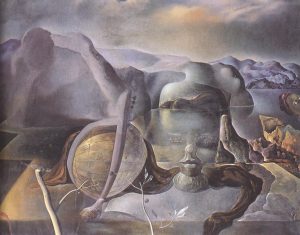