I find discussions of Salvador Dalí’s “Sacrament of the Last Supper” fascinating – but often unpredictable. That’s because the work has the dubious distinction of being one of the most highly lauded and vigorously derided paintings of the modern era. 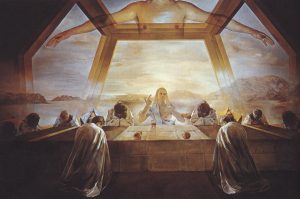 I’m pretty sure no one is neutral about this imposing masterwork: you either really love it or really dislike it. There’s no fence-sitting when it comes to this Dalí canvas.

I suppose it could be like the well-known admonishment not to discuss religion or politics in social gatherings, lest you want a fight on your hands. Religious subjects – especially one so ingrained in our consciousness, mainly due to Leonardo Da Vinci’s “Last Supper” fresco in Milan – are inherently tricky. Depicting Jesus Christ can be a sensitive road to venture down. 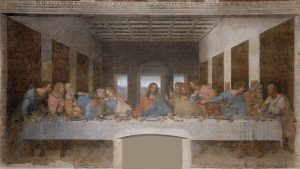 Indeed, look how Dalí did it. Christ clean shaven. Blonde. Transparent. Some even believe His face is that of Gala, as it is widely known that Dalí painted her as the Madonna in several other works, and included her in a large number of his paintings.

Protestant theologian Paul Tillich is famously known to have called Dalí’s picture “junk.” A National Gallery employee I spoke with years back – responding to my question of why, at the time, the painting was hanging on an obscure wall in the museum’s gift shop – told me, “I’d put it in the basement if I had my way.” (Chester Dale, the banker/collector who inspired Dalí to paint this work; purchased it as soon as he laid eyes on it; and ultimately donated it to the Gallery, surely would not have appreciated that employee’s outrageous comment.) 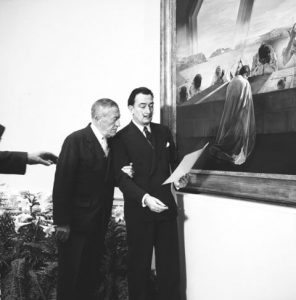 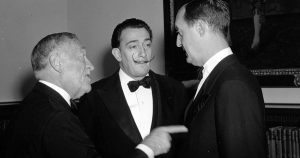 Mssrs. Dale and a dapper Dalí, with another unidentified gentleman.

Some of the disdain – which of course is counterbalanced by countless worldwide admirers of the work – is certainly due to the unconventional nature of the Passover feast. However, we know that Dalí did not intend to depict the historical scene of Christ’s Passover meal at all.

Instead, Dalí’s aim was to focus on the sacrament of the Eucharist. Indeed, the work’s title, unlike that of Leonardo’s, is “The Sacrament of the Last Supper” (italics mine).

Moreover, some people just couldn’t wrap their head and hearts around the stark symmetry in the work, with the anonymous disciples on the left mirroring those on the right. And what are we to make, many have wondered, of the enigmatic torso at the top of the composition?

Of course, it’s clear that figure takes on several meanings: God the Father, whose face we mustn’t see; Christ’s ascension to heaven; the Holy Spirit embracing the entire scene.

The geometric figure that forms the background is part of a dodecahedron, a 12-sided figure which Plato described as embodying the universe. Dalí was striving for a sense of purity and perfection in this picture. Its technical virtuosity — a kind of photographic precision — nearly takes one’s breath away.

Speaking of perfection, Dalí employed the Golden Ratio or Golden Rectangle here, which is known as one of the most visually satisfying of all geometric forms. It’s also related to the Golden spiral, created by making adjacent squares of Fibonacci dimensions. 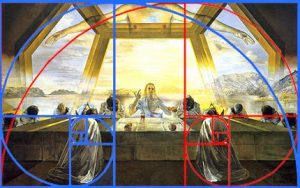 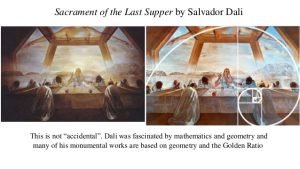 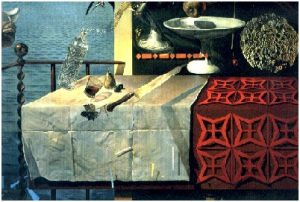 Still, some detractors contend Dalí’s “Sacrament of the Last Supper” is too cerebral and cold. Others disagree, including me, to be sure. It’s my belief that the calculating underlying mathematics employed in this work; the stark symmetry; the dodecahedron details; and the unusual appearance of Jesus’ see-through torso all contribute to a sense of perfection. A sense of harmony, mystery, and a transcendent spirituality that make this painting by Salvador Dalí the most popular work of art in the National Gallery of Art in Washington, D.C.

One could simply say it’s miraculous.

Dalí said of it, The first Holy Communion on Earth is conceived as a sacred rite of the greatest happiness for humanity. This rite is expressed with plastic means and not with literary ones. My ambition was to incorporate to Zurbaran’s mystical realism the experimental creativeness of modern painting in my desire to make it classic.

Advised Dalí, in one of his best-known quotes: “Don’t worry about perfection; you will never attain it.” But I think he did in this very special masterpiece. It was unveiled to the world on Easter Sunday, 1955, in our nation’s capital. 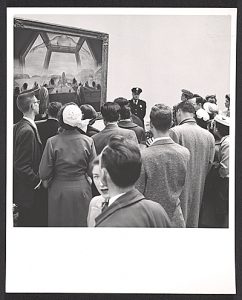 I want to add a final word. And while the term is vastly over-used, I cannot think of a better one: Dalí’s “Sacrament of the Last Supper” truly has an awesome quality to it. It evokes an overwhelming sense of the ethereal, the human spirit, the human soul. Indeed, it is said that Dalí crafted the arc of the seated Apostles in such a manner that we, as the viewer, get a sense that we’re not merely looking at the scene — we’ve become included in it.

That, my friends, is genius.