There’s an endless number of doors behind which fascinating stories emerge when we enter the house of Salvador Dalí. I’m talking metaphorically, though Dalí’s actual house in Port Lligat, Spain, is indeed a topic about which there are interminable tales to tell, too.

Let’s open a few disparate doors today and enjoy the diversity of things we can discover about the world of Salvador Dalí . . .

Who hid the sofa?

Here’s a 1936 Dalí oil on wood panel that virtually no one’s familiar with. Not only does it look atypical of Dalí’s painting style, but its title is perhaps more confounding than most: A Trombone and a Sofa Fashioned out of Saliva. There can be little doubt the trombone is a nod to Magritte, who featured a flaming trombone in at least one of his surrealist canvases. But am I blind, or do I just not believe any particular piece of furniture shows up in this work? And we know the medium is oil – but saliva, too? Really? Am I being too literal? 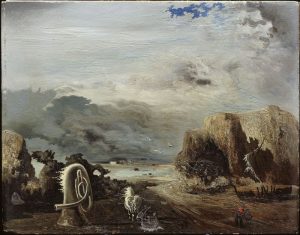 An angelic frame, too

This lovely Angel painting is owned by a collector friend of mine in North Carolina. While we can’t say it’s a widely known Dalí, it’s certainly a stunning one – made all the more so by its magnificent frame. The people to whom I’ve shown this piece framed (it appeared unframed in an auction catalog some years back) uniformly comment on how positively awesome the frame is. They’re positively right! 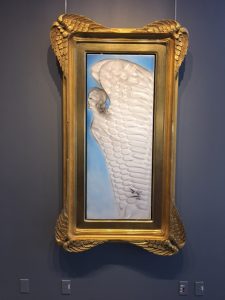 Weird watercolor…or is it gouache?

This virtually unknown Salvador Dalí work (it’s unclear if it’s entirely watercolor, or watercolor and gouache – and yes, I know it looks like an oil) recently surfaced somewhere in my Dalí orbit. I know nothing of its whereabouts or title, but it’s an image I wanted to share with readers because (a) it’s virtually new to most Dalí enthusiasts and (b) it’s just plain weird and wonderful! 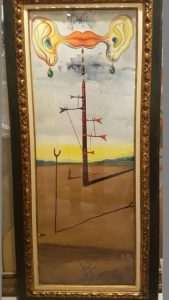 I love to learn as much as I can about Dalí’s process – how he worked, what tools and references he used, and so on. Here’s a great example of how Dalí used photographs to produce stunningly realistic images in his paintings. The photo of the freight train car, and of the artist himself in an “ascension” pose, were the models he used to paint these details in his enormous masterwork, The Perpignan Railway Station (a shortened version of its impossibly long title). 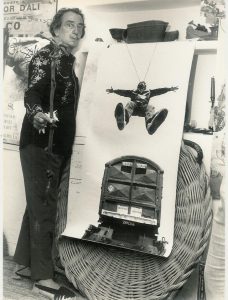 Is this the most beautiful child portrait ever?

Whenever I consider Dalí’s large Nuclear-Mystical masterpiece, The Madonna of Port Lligat of 1950, my eye is inextricably drawn to the Christ child in the square opening in the Madonna’s chest. Isn’t it a magnificent depiction of the auburn-haired Child? Just beautiful. 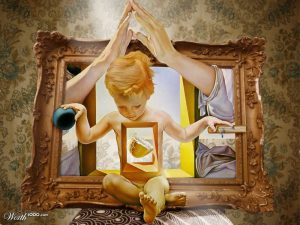 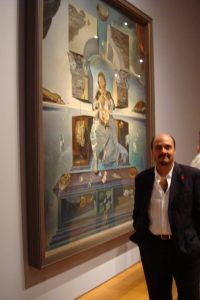 If Dalí had painted nothing in this work but this detail – this stunning portrait of a baby boy – it would have found its place among the most beautiful paintings by the kingpin of Surrealism. In fact, here it is – “framed” by another clever photo shop artist who saw fit to single out and showcase this breathtaking view of young Jesus.