It’s “fuego” in Spanish. “Foc” in Catalan. And it occupies a curious place in the life and work of Spain’s hottest artistic product, Salvador Dalí. I’m talking, of course, about “fire.”

Dalí’s most prominent and provocative representation of fire appeared in his outrageous and iconic images of a giraffe on fire, which made its first appearance in The Burning Giraffe of 1936-1937. This paradoxical and dramatic image found itself in a host of subsequent paintings, drawings, prints, and even sculpture by Dalí, including Inventions of the Monsters of 1937, The Dream of Venus of 1939, and The Flames, They Call, painted in 1942. In Dalí’s world, a burning giraffe was a symbolic harbinger of impending war. 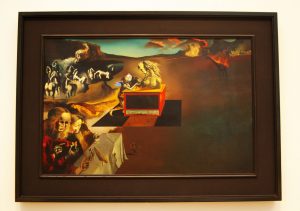 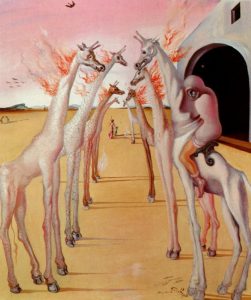 Prints included one he did for Currier & Ives – Fire, Fire, Fire! – and The Flaming Giraffe in the Human Jungle print suite. Woman Aflame is among Dalí’s most popular sculptural images. 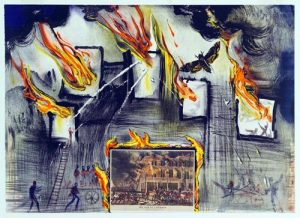 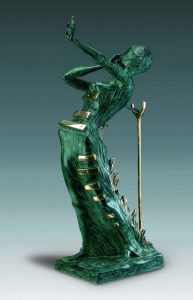 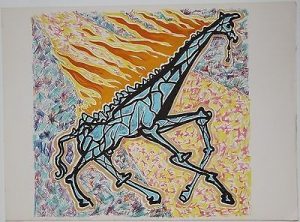 Dalí depicted a tuba on fire – an unabashed nod to fellow denizen of Surrealism, Rene Magritte – in his first version of Dalí’s Seven Lively Arts painting, Boogie-Woogie (more about that in a moment). We even find a tiny flame of a lit candle in the bottom center of the great but little-known oil, Juliet’s Tomb, of 1942. 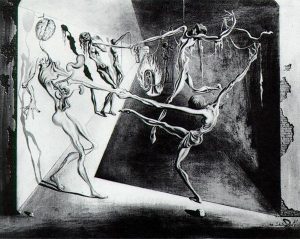 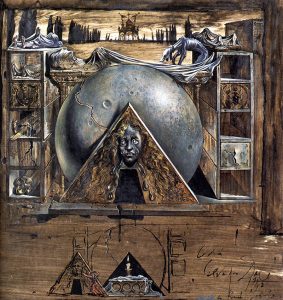 I remember how I thought Dalí suddenly shouted an obscenity in the 1975 BBC documentary, Hello, Dalí, when he orchestrated a ceremonious scene that involved several people holding burning candles alongside a stuffed giraffe. Dalí then blurted, “Foc!”, which sounded like another four-letter word, but was in fact the Catalan word for fire.

And then there were the three major incidents in which fuego/foc/fire burned its way into Dalínian history. First, there was the fire at the Mt. Kisco, New York home of Broadway impresario Billy Rose. Rose had commissioned Dalí to paint his vision of the Seven Lively Arts, which was a revue Rose was staging at his Ziegfeld Theatre in New York City.

For a period of time after the Dalí paintings were created in an upstairs studio Dalí set up at the Ziegfeld and then displayed in the theatre’s lobby, they were moved to Rose’s residence at Mt. Kisco. Then, in 1956, a fire of unknown original swept through the spacious estate, and the Dalí’s – along with other precious fare – were destroyed. 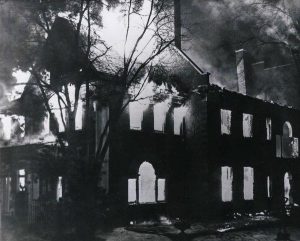 Rose’s Mt. Kisco estate up in flames — along with the Dalí’s.

Incredibly, Dalí offered to re-paint the seven works, and at the same price he was paid more than a decade earlier. He did so, and there’s long since been some debate as to which ones were better (I favor the first set).

Fast forward several more decades, and we find how fire played a disastrous role in Dalí’s world in August 1984, when he was ailing in his room at the 12th century castle-residence in Pubol and a short-circuit in his nurse-alert buzzer caused a fire that resulted in first- and second-degree burns to his leg. The poor man was reportedly found by long-time friend and biographer Robert Descharnes, crawling along the bedroom floor toward the doorway. 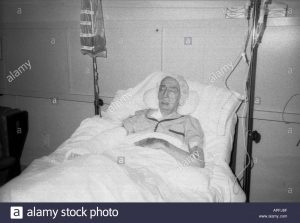 Most recently, it turns out that Dalí’s re-make of Boogie-Woogie from his Seven Lively Arts series (the new work has gone by two titles — The Dance, or Rock ‘n Roll) ended up in the collection of the wife of notorious Columbian cocaine king, Pablo Escobar. 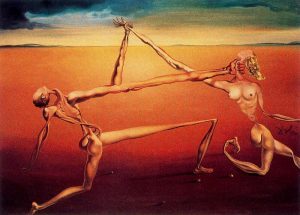 In 1988, a car bomb targeting Escobar and his family tore through the apartment building where the Dalí was hung in the Escobar’s library. No one was hurt – including the Dalí. The painting was then moved to the residence of Escobar’s sister-in-law, where, incredibly, it survived unscathed yet another fiery attack.