The face of the woman standing in the upper portion of Salvador Dalí’s huge 1962 painting, Battle of Tetuan – presumed to be Dalí’s wife Gala ever since it was painted 57 years ago – now appears to actually be that of a young former United Nations guide, whose look was the precise “type” for which Dalí was searching. 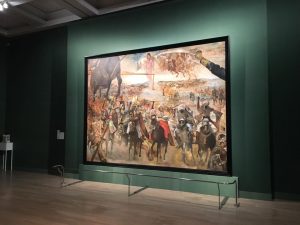 At least that’s the view of Marie (nee Weizmann) Briefel, who says she thinks she was the inspiration behind the Virgin who appears ethereally above the battle between Spain and Morocco, surrealistically captured in Dalí’s 10-ft. x 13-ft. canvas, which is owned by the Morohashi Museum of Modern Art in Fukushima, Japan. 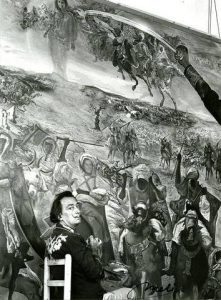 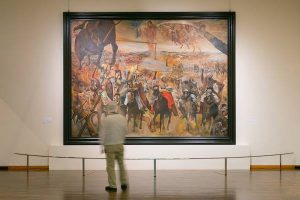 If this is true, Dalí scholars and aficionados aren’t the only ones who were in the dark about this all these years. Mrs. Briefel herself wasn’t aware of it until only a few months ago!

The surreal twist in this esoteric yet fascinating tale began in 1961, when Marie Weizmann – a French young lady whose family originated from Morocco – found herself working at the United Nations in New York City at age 19.

She was a young tour guide there, and was asked to be in charge of visitors such as Yul Brynner and Frank Sinatra, the latter with whom she co-hosted a U.N. Day.

One evening, while she happened to be at the St. Regis Hotel – Dalí and Gala’s winter home for many years – the artist approached her, coming toward her “like a bull! I told him, ‘I know you, but you don’t know me,’” Marie recalls. “It was like he was looking for something and had finally found it!” she says in describing the intensity with which Dalí greeted her.

Marie later learned Dalí went to various New York universities for inspiration, since foreigners would likely be found there and he was looking for distinct facial features. 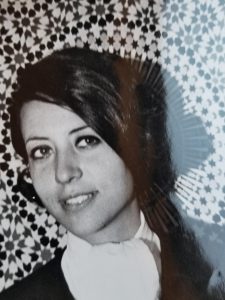 He asked me, ‘Where can I reach you?’ I told him I worked at the United Nations,” Marie said.

She was understandably cautious, being a young woman alone in the big city. “I was safe at the U.N.,” she said. “Two days later Dalí called me and said, ‘Please come, I need to talk to you.’ He was very firm and made arrangements to meet at the St. Regis.

“We sat at a table and I was wearing my uniform. It had my name on it. 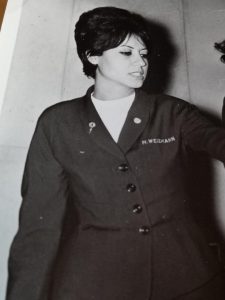 I was the type he was looking for. He wanted to be authentic. He explained he needed the virgin’s face at the top of Battle of Tetuan. ‘I want you to be the face,’ Dalí told me.”

Dalí was with a female companion whose identity Marie doesn’t know, but he turned to the woman and said, “You see what I told you!” He was confident that what he was looking for was precisely what Marie represented – and was now seated across the table from him.

‘We’re going to Tetuan,” Dalí told Marie, “and I would like you to come with us. I don’t want you to believe I bring bad luck to whomever I paint.” 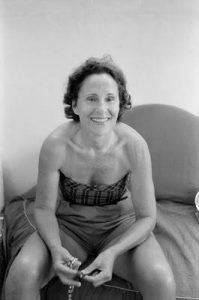 Dalí and his entourage eventually returned to Europe after wintering in New York. Three years later, Marie moved to Paris, France. The issue was essentially dropped and, over the decades, forgotten.

That is, until Marie’s daughter, a professor at Bowdoin College in Brunswick, Maine, gave a lecture last November at a conference in Florida. While there, she visited the Salvador Dalí Museum in St. Petersburg. She had remembered her mother telling her the Battle of Tetuan story and decided to google the work.

“My daughter immediately called me and exclaimed, ‘Maman, it is you!’”, Marie recalls (Maman is the French for Mom). Of course, she was referring to the woman at the top of the painting. “My friends at the U.N., who remember me, say it is me. Even my young grandchildren, when they saw the picture, shouted, ‘It’s Mamie (French for grandma)!”

But the connection between Marie Weizmann and Salvador Dalí didn’t end when he left for Tetuan that day in 1961. There was another brief encounter four years later in Paris. As coincidence would have it, she was dining one evening at the oldest restaurant in the city – L’Escargot Montorgueil – and Salvador Dalí was there.

“He stood up and exclaimed, ‘You are here?!’” Marie recounts.

Nothing was mentioned of the finished Battle of Tetuan, but Marie reasons that Dalí had her face fixed in his mind. “That figure of the woman is one-hundred percent me. My husband says it is me. I know my face. Dalí went from memory,” Marie said. “We spent two hours together at the St. Regis. I was very natural, my eyes were dark, my hair fluffy.”

Marie, who currently works as a legal recruiter for law firms in New York, points out another interesting “wrinkle,” of sorts, in this unusual turn of events. If you look carefully at the blouse of the female figure in question, Marie believes you’ll discern the letter “W,” which she figures stands for Weizmann. Says Marie: “The painting is like a puzzle, where you put the pieces in place…The painting that I discovered very recently is very interesting and complicated, as must have been the thoughts of Dalí.

“Before meeting him,” she continued, “what I saw of him was very original and odd. I always thought that his paintings did not show the real person, man or woman. I thought he was going to paint me as a clock or any other kind of animal. The painting is grandiose and I am glad I saw it finished and real.” 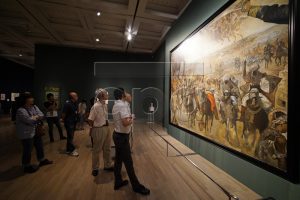 Told that most people have undoubtedly thought of the standing woman in the painting as Gala Dalí (Gala does, in fact, appear in the painting, astride a horse next to a self-portrait of Dalí), Marie replied, “If it is really Gala, may she rest in peace.”

And may Salvador Dalí rest in peace, as today marks the 30th anniversary of his passing.

(NOTE: SINCE THIS POST WENT LIVE, NEW DEVELOPMENTS HAVE OCCURRED THAT “SHIFT” THINGS SOMEWHAT! THIS WILL BE REVEALED, AND WILL MAKE GOOD SENSE, IN MY POST THIS COMING MONDAY, AT WWW.DALI.COM/NEWS.)

[Images used under Fair Use Doctrine for journalistic purposes only. Special permission granted by Marie Briefel for use of her photos]