One Salvador Dalí painting I sense sort of flies under the radar some – a work I don’t believe leaps readily to mind when people think of the artist – is “Sistine Madonna,” a.k.a., “Madonna of the Ear.”

So today’s a good time to take a brief look at this unique picture, since the Metropolitan Museum of Art in New York has lent the large 1958 canvas for the Dalí/Duchamp show at the Salvador Dalí Museum in St. Petersburg, Florida. 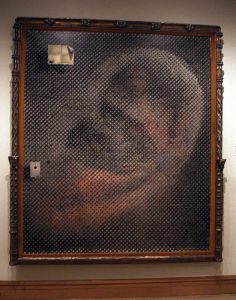 Dalí has once again ingeniously melded a number of influences and interests in a single masterpiece. It begins with his nod to one of the great masters he highly venerated: Raphael. Dalí pays tribute to his iconic painting, “The Sistine Madonna,” in the hidden image of the Madonna and Child seen in the large ear that occupies the majority of the composition. 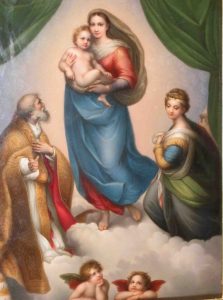 The ear was inspired by a photograph of Pope John XXIII that appeared in an issue of Paris Match magazine, and which Dalí had enlarged to accentuate the half-tone dots inherent in letterpress printing. Cleverly, Dalí was able to hide the image of the Raphael work, until it becomes more discernible as one walks further away from the canvas. The ear becomes more readily detected as well. Scholars point out that Dalí was referencing the Catholic doctrine of Jesus’ virgin birth.

In fact, despite the two alternative titles of this painting noted above, Dalí’s actual original title – wonderfully emblematic of his often flamboyant titles – was “Quasi-gray picture which, closely seen, is an abstract one; seen from two meters is the Sistine Madonna of Raphael; and from fifteen meters is the ear of an angel measuring one meter and a half; which is painted with anti-matter: therefore with pure energy.”

Certainly the direction of Dalí’s art at the time this work was painted was heavily influenced by his fascination with nuclear physics. The so-called Ben-Day dots in “Madonna of the Ear” may also symbolize the notion of atoms, protons and neutrons, which science had revealed, at the time, make up all matter at the molecular level. Dalí was fascinated by such discoveries, and his work reflected his keen interest in them.

In addition to the scientific and religious influences here, we also find a wonderful little reminder that Dalí was a great realist painter and appreciated the concept of trompe-l’oeil – fooling the eye with imagery that seemed photographically real. This was effectively achieved in the paper, string, and cherry running vertically along the left side of the work. Even though it’s completely unrelated to the main theme of the painting, Dalí managed to include it without it being a disturbing element in the least. He simply wanted to show-off his virtuosity!

When this remarkable painting was displayed at the old Carstairs Gallery in New York City in 1959, Dalí dedicated it “to Gala, my Sistine Madonna.”

You can see it at the Florida Dalí Museum through May 22, along with several other great Dalí’s lent there, including one of history’s most famous religious pictures: “Christ of St. John of the Cross.”