Salvador Dalí’s work is so much more interesting – at least I think so – when you can get a glimpse into his creative process. Dalí was such a perfectionist of a painter (not to mention as a creator of prints, drawings, watercolors, sculpture, even holograms) that it’s fascinating to get a sense of how his works evolved along the way, from concept to completion.

Specifically, as part of that methodical process, I’m talking about the references and models he used. Dalí was known to work frequently from photographs as well as live studio models.

Today I’m looking at just two Dalí’s and two photos that were key in their creation. One is among his best-known masterworks – in fact, the canvas considered the very first of Dalí’s large masterworks – while the other is a curious and really little-known picture. Both works honor the centrality of Gala in Dalí’s life and artistic oeuvre.

I find it intriguing to see the translation of a preparatory reference photo to the finished painting. Here we can see how the photo of a praying Gala, swathed in sheets, served as the model for the lovely portrait of her as the Virgin Mary in the 1950 painting, The Madonna of Port Lligat. I’ve included a study Dalí did of Gala’s face as well. 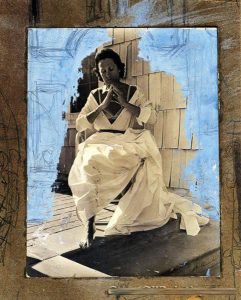 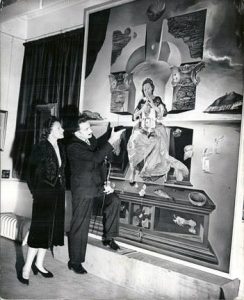 Notice how the finished painting is exactly the way Gala was posed in the corresponding photograph of her.

directly from a photo. 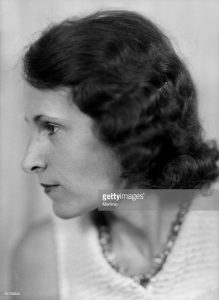 Several anecdotes have come to my attention over the years about Dalí employing photos in the development of his art. One was a remark that the dove in The Ecumenical Council looked more stuffed than real-life. The fact was, as Dalí readily explained, he used a stuffed bird as the model for it. He painted it exactly as he saw it! 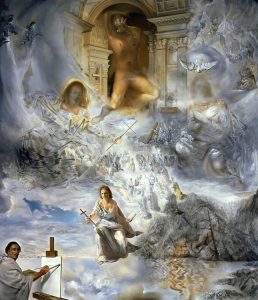 OK, while that example isn’t exactly one involving photography, this one is. It deals with Salvador Dalí’s grand masterpiece, Santiago El Grande, about which someone commented that the horse lacked the look of a “real” horse. 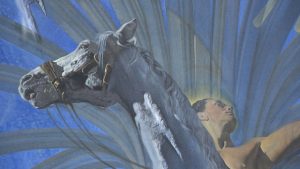 The fact remains: the monumental horse in Santiago El Grande leaves viewers in awe of both the image, and the artist who created it.