Thanksgiving in America is over, so next up are Christmas and Hanukkah – and Salvador Dalí’s creativity most definitely did not take leave for the holidays. In fact, his gift of artistic genius seems to have shone in a magical way, as seen in a number of his Christmas-themed works.

Most notable is his beautiful “Noel” of 1946, which found wide popular exposure when it graced the special Christmas cover of Vogue magazine. Its editors pointed out to readers that the two arched sections, when joined together, form the face of the Madonna. 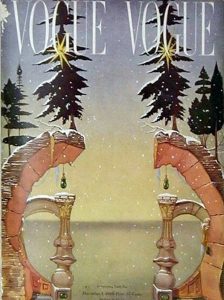 Dalí’s Vogue Christmas cover has long been a collectible.

The snow on the stone arches, the shadow of a kneeling angel at lower left, the festive, gleaming pine trees – they all converge to make this one of the most delightful and truly lovely works ever created by the master of Surrealism.

One organization that took notice of jolly Dalí was Hallmark, which commissioned the artist to produce 19 designs for greeting cards, only a few of which are seen here. One of those card images – to my knowledge never actually produced by Hallmark – is this one of Santa Claus, seen below. 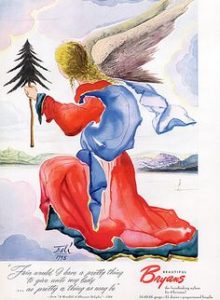 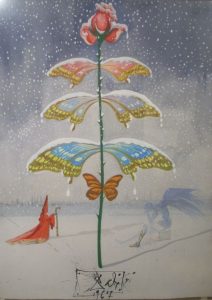 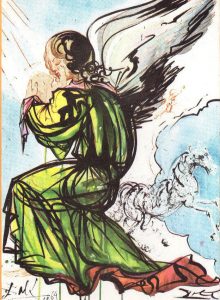 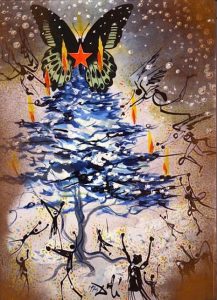 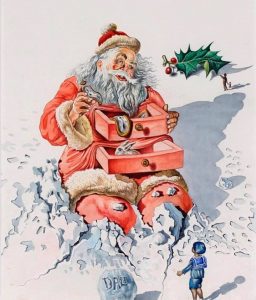 I supposed drawers curiously emerging from Santa’s torso (a literal chest of drawers!) was just too radical a departure from the traditional depiction of old St. Nicholas. But when I only recently first saw this illustration, I fell in love with it.

Who but Salvador Dalí would find a clever way to meld the charm and tradition of Santa Claus with the psychoanalytical symbolism of Freud! The drawers that have long been a Freudian symbol of hidden secrets and repressed thoughts also accord fittingly with packages of holiday surprises. The two drawers-cum-gift boxes offer soft watches and an adorable bunny with oddly elongated ears.

Metaphorically, it’s not hard to see how the drawers of Santa are a revelation of the soul and spirit of Christmas itself. But I see something further in this wonderful portrayal of the main man of Christmas (besides Jesus, of course, whose birth is celebrated on this special day).

Here we see Salvador Dalí a bit more “humanized.” The somewhat mysterious Surrealist kingpin, with his saucer eyes and outlandish mustache, his ever-present walking stick and irrepressible penchant for publicity, is seemingly transformed and “normalized” into a man with a robust sense of humor and a charming way of interpreting a holiday icon.

The face of Dalí’s Santa is rather interesting. My guess is that Dalí used a model for this, as it seems to capture a very specific countenance. A face that looks like one that just might be a bit weary from all the hard work dear Santa invests each December 25th!

Of course, we see young Dalí, decked out in his popular sailor suit, looking up in wonderment at the towering pillar of Christmas, who holds a soft watch and reveals two others in his top drawer. I love Dalí’s etched signature in the large foreground snowball.

What we get to unwrap here is Salvador Dalí’s sense of humor and his ability to be child-like in his interpretation of Santa Claus – a side of the artist we don’t often see when we consider the usual dreams and nightmares that typify his work. The image is really beautifully executed.

Here, for a moment, Dalí was a child. For which so much of Christmas is meant.