In some ways, painting is like writing. They’re both creative pursuits, and in either case you never quite know where, when and how the muse will strike.

Today’s blog post evolved from my eating a tangerine and contemplating what I’d write about. The juicy, delicious fruit reminded me how Dalí would sometimes notice a completely irrelevant object while painting and decide to include it in whatever picture he was working on.

And thus today’s idea was born: the appearance of fruit in Dalí’s paintings. Heck, there’s been plenty written about the eggs and bread that appear in the surrealist master’s work. Today, we’re all about fruit.

One work you’re likely not to be familiar with is Southern California (1947). Some of the oranges have been “Dalínized” to make them look a bit like a crumbling wall. Oranges also appear in the great Flor Dalí/Les Fruits (Dalínean Fruits) print series, and in the beautiful miniaturist oil, Dionysus Spitting the Complete Image of Cadaques on the Tip of the Tongue of a Three-Storied Gaudinian Woman. 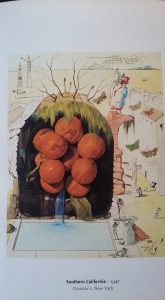 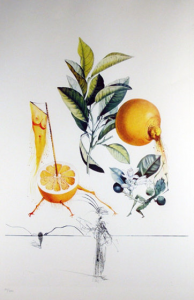 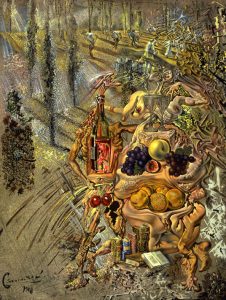 Grapes have long symbolized revelry, celebration, and even a bit of debauchery. Gala seductively holds up a bunch in Suburbs of a Paranoiac-Critical Town, and grapes make an appearance in Couple with their Heads Full of Clouds. They also appear in the provocative painting, Family of Marsupial Centaurs and in the colorful Dalí print, Portrait of Autumn. 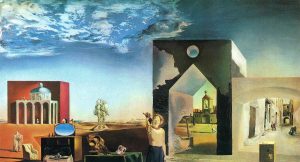 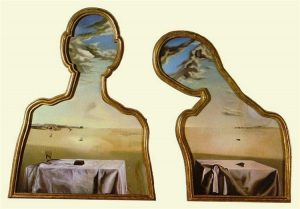 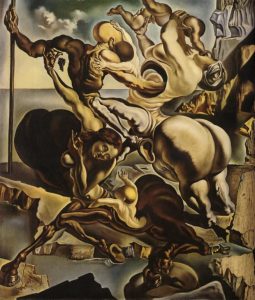 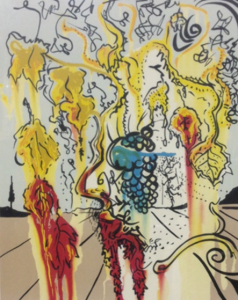 The pomegranate symbolizes fertility, abundance, prosperity and more, and we find this unique fruit in Dalí’s One Second Before Awakening from a Dream Caused by the Flight of a Bee around a Pomegranate and in Dematerialization Near the Nose of Nero. 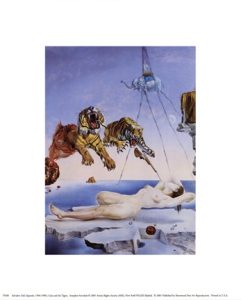 One of the earliest stories about young Dalí was his painting a still life with cherries. He would reminisce about these early days when he was a fledgling young artist dreaming of one day becoming a famous one.

An enormously important and tragic event occurred before Salvador was even born – the death of his brother at 22 months. Astonishingly, he was named Salvador, and the persistent memory of the dead brother would haunt Salvador the artist throughout his life.

Cherries appear in the molecular motif of Dalí’s haunting Portrait of My Dead Brother – the fruit no doubt a throwback to the artist’s childhood memories. Cherries likewise appear in the aforementioned Dionysus Spitting the Complete Image of Cadaques…and a lone cherry dangles from a string in Madonna of the Ear (a.k.a., The Sistine Madonna). 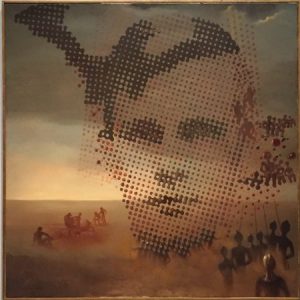 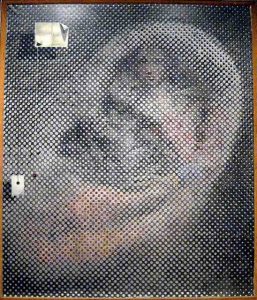 The warmer weather turns our thoughts to watermelon, which Dalí depicted with wonderful realism in Feather Equilibrium, and also in Gradiva Becoming Fruits, Vegetables, Pork, Bread and Grilled Sardine. And again in Allegory of Sunset Air (Allegory of the Evening). 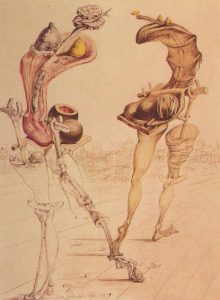 While there are many other works bearing fruit, as it were, we might conclude our discussion with Dalí’s iconic Apparition of Face and Fruit Dish on a Beach, which – depending on the beholder’s eye – may feature apples, or pears, just as an apple for certain whizzes airborne in Nature Morte Vivante, and a piece of peeled fruit (exact type unclear) graces one of Dalí’s best surrealist pictures, Autumn Cannibalism. 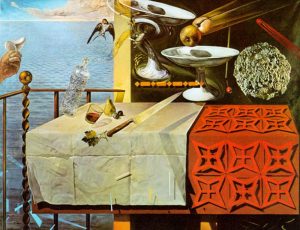 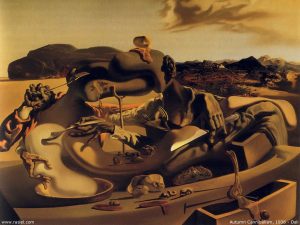 And then there’s a lemon and apple in Untitled (Still Life with Lilies)…a pear in Song of Songs of Solomon print series…more pears in Invisible Afghan…. And apple heads in set designs for Sentimental Colliquy. The list goes on. 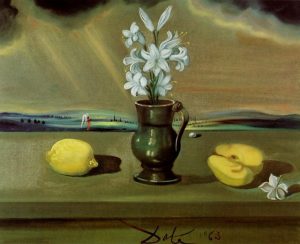 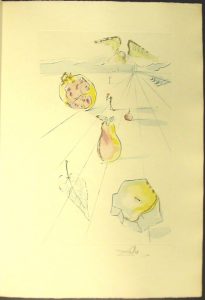 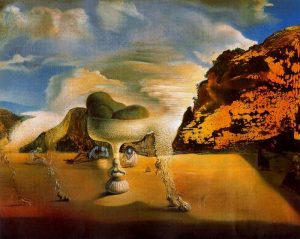 So, a bit of fruity fun here today. I mean, Salvador Dalí wasn’t always about over-ripe watches and undercooked giraffes! Oh, as for the fruit Dalí enjoyed eating most: pink grapefruit.