I love coming across things about Salvador Dalí that (a) I know I’ve never been aware of before, and (b) I’m pretty sure most others haven’t either. Today’s post is a double-whammy – the good kind – because I’m looking at two Dalí creations that have escaped my radar for more years than I care to count.

The first involves the strangest “locomotive” Dalí was asked to design to lead the Greenwich Village Spring Day Parade in New York in 1959.

It is the most preposterous contraption – known as a Loconik – as seen in Dalí’s sketch of it, which appeared on the cover of the Greenwich Village publication, The Villager. 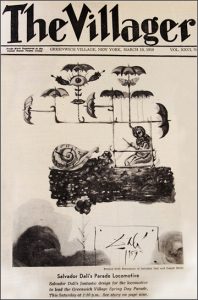 I’m not entirely sure I have this right, but I believe the owner of the Albert Hotel, or perhaps just the Albert French Restaurant in New York, was the financial engine behind this strangely conceived conveyance. His name was Joseph Brody. And I’m going to excerpt some relevant parts of a piece that ran in The Villager:

The hotel owner visited Dalí at his St. Regis Hotel suite. “We’re delighted with your contribution to the parade,” the hotelier started, “but we’re not quite clear about its exact meaning or purpose.

“Dalí’s face lit up,” wrote William H. Honan of The Villager. “I couldn’t have said anything more flattering. ‘Confusion! Dalí creates confusion!’ he exclaimed. ‘And if you’re not any clearer after we talk, call me tomorrow and I’ll offer you more obscurity.’”

Acquiescent, the hotel owner inquired about the umbrellas on Dalí’s locomotive. Said the Maestro: “Dalí all the time creates the contrary of everything. The umbrellas mean pleasure…The umbrella is the skeleton on the outside, like a lobster…and the umbrellas should have water coming out of them, instead of falling on them.”

The parade’s coordinator, one Mr. Mardus, interjected that creating umbrellas that would rain themselves would be prohibitively expensive. Could Dalí use soap bubbles? he asked.

“Soap boobles?” Dalí repeated. “Yes, Dalí is also a diplomat. We shall have soap boobles. Inside Dalí’s locomotive, it is snowing!” But, according to The Villager, Dalí warned that if the locomotive were not built in all other respects to Dalí’s specifications, he would not ride on it during the parade. 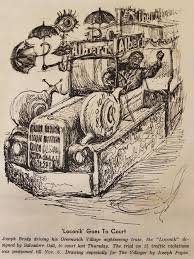 Another sketch (not by Dalí) of the so-called Loconik.

The Villager added: “Mr. Mardus explained that a crew of men were working night and day to build the locomotive on schedule for the parade this Saturday. ‘The more the builders suffer,’ Dalí replied, ‘the better Dalí’s locomotive will be. It is not easy to build this rhythm of confusion which is poetry….’

“The more we scratched our heads, the more enthusiastic Dalí became,” the article reported. “He told us that the chassis of the locomotive was to be made of real coal because coal is ‘man’s subconscious’ and also the ‘source of all energy.’ He had wanted to build the locomotive ten stories high. He had wanted it to ‘breathe’ like an animal. Any nation that can send a rocket into space, he said, can certainly build his locomotive….”

Although the original cost of building the vehicle was put at $4,000, it reportedly ended up costing $16,000. But Dalí was not charging the parade people anything. Said one of the coordinators: “He’s doing it for the community. He (Dalí) loves The Village. So do I. I’ve made my fortune there. I want to give something back to the people.”

One report has it that restauranteur Brody’s free tours of Greenwich Village, aboard the Dalí-designed conveyance, was a ploy to bring in customers. Whether it worked or not is a historical footnote I’ll have to explore sometime.

Here’s a lovely, charming, sweet little drawing – called The Dancers, I believe, which came across my radar only a few days ago. 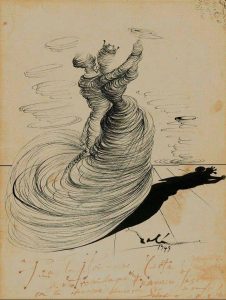 I’d never seen it before. I carries some sort of dedication/inscription at the bottom. It ironically happens to have been drawn in the year of my birth. And the female dancer is wearing a crown. It’s also interesting that, while Dalí employed that oft-seen “spinning man” technique in drawing the figures, their shadows are cast in very heavy dark ink.

It’s always a special kick to come across new things about Salvador Dalí. At least new to us, right?