from the suite Changes in Great Masterpieces 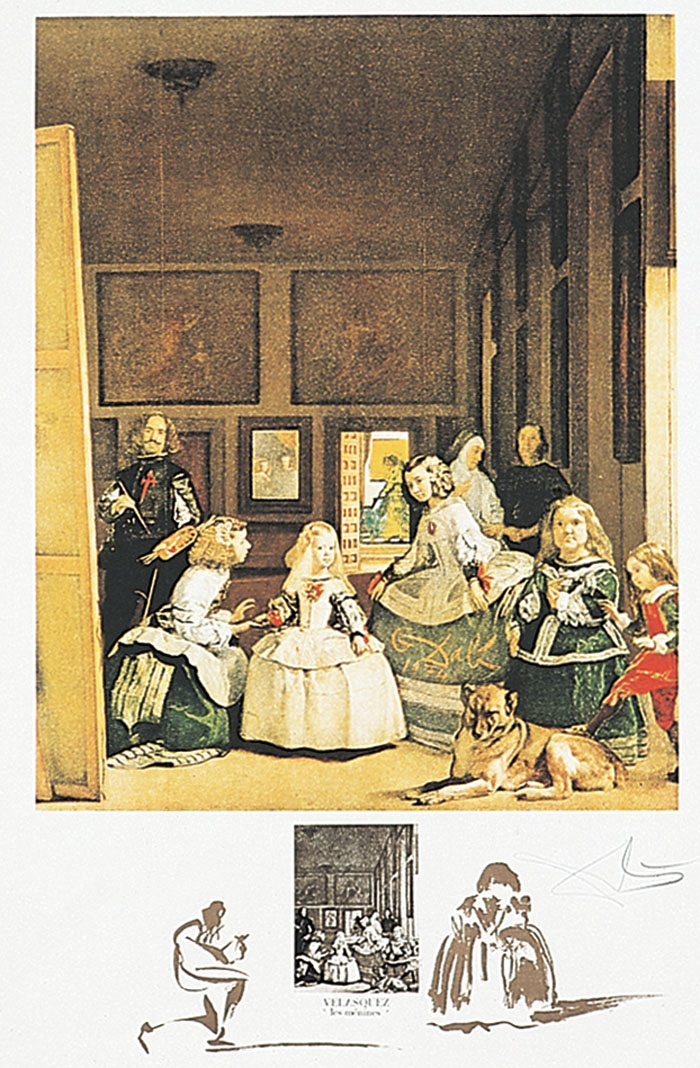 (Mr. Chimera worked directly with Dalí Museum founder Reynolds Morse, as the publicity director of the original Dalí Museum when it was located in Beachwood, Ohio)

At age 77, Dalí had built an astonishing legacy – including two of the most important of his creative undertakings. One was the establishment of his museum (Teatro-Museo Dalí) in Figueras, Spain – the town of his birth in 1904. The other was his creation of the unprecedented suite of lithographs known as “Changes in Great Masterpieces” – including, immodestly, his own “Persistence of Memory.”

But none of the six graphics in this series is as supremely Spanish in tone and temperament as “Maids of Honor,” precisely because it depicts what scholars often cite as the single most important work of art by the Renaissance artist who was Salvador Dalí’s single most respected: Diego de la Silva Velasquez.

Now, though, instead of a male figure standing in the doorway at the middle rear of the picture, Dalí has given us a woman, looking very much like she might have been borrowed from a painting by Vermeer – even with the suggestion of a map on the wall behind her, as was often the case in Vermeer’s works.

Below, in smaller scale, we find a sepia reproduction of the Velasquez painting, between Dalí’s fine sketches of a kneeling man and a woman in a billowy dress, very much like the blonde girl in the foreground of the Velasquez canvas.

The observer/collector gets a kind of dual treat here: the spectacular iconic image Velasquez painted in 1656, and Salvador Dalí’s modern, surrealist re-interpretation of it – directly on an image of the original painting, plus the Dalíesque sketches at the bottom of the print. It all adds up to something utterly unique and supremely “Dalínian!”