Certain Salvador Dalí paintings tenaciously glom onto my consciousness like a soft watch inextricably draped over a barren tree branch. One such work that persistently intrigues me is the very little known gouache and collage, “Celestial Coronation,” shown here in black & white because I know of no color reproduction of the privately owned work. 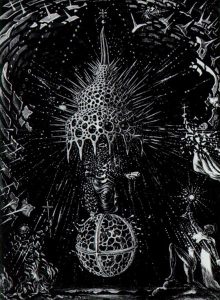 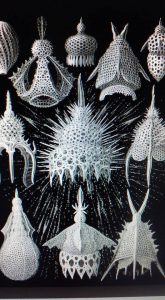 The German-born Haeckel produced numerous illustrations of animals and sea creatures, and dealt as well with intricate mineral skeletons produced by protozoa. These labyrinthian forms fascinated Salvador Dalí, and he clearly and directly acknowledged Haeckel’s work in his c. 1951 Nuclear-Mystical painting.

In “Assumpta,” the elongated, El Greco-inspired figure of Gala as the Madonna is flanked by convulsive swirls of massive rhinoceros horns, representing Dalí’s interest in the logarithmic curve, of which rhino horns are a naturally occurring example. In “Celestial Coronation,” the central figure is flanked by a steely protective armor, whose points look sharp and dangerous, yet may have been inspired by sea urchins, another fixture in Dalí’s native Port Lligat, Spain, and a favorite culinary treat of the Catalan master. 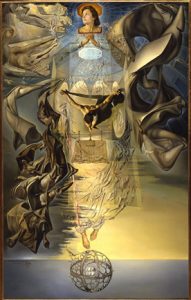 The Madonna and child motif in the present work features the Christ child in the principal figure’s right hand, while in her left hand is a Bible. A halo hovers above both figures’ heads. Two kneeling angels posed in adoration appear at bottom left and right, one clutching a crucifix, the other holding a chalice and host. A third crucifix-clutching angel is seen at middle right.

The central Madonna figure, as well as the angel in the lower left, are dematerialized into atomic-like particles – a principal tenet of Dalí’s Nuclear-Mysticism, nodding to the discoveries in particle physics that modern science was revealing at the time. Ultimately, Dalí felt that science was bringing us closer to a realization that the most enduring and universal truths spring from something far greater than our temporal presence.

What strikes me, and perhaps you, too, about “Celestial Coronation, is the kind of other-worldly spirituality and mystery inherent in the work. It melds the softness and purity of an angelic aura with almost menacing and formidable spike-like structures – leaving us a little off-balance in understanding just what it is we’re viewing in this rarely seen work.

In short, it is Salvador Dalí doing what he did best: paint great works that leave us not quite sure where we’ve landed ourselves, yet glad we’re here!