BREAKING NEWS (St. Petersburg, Florida)… What meteorologists are calling a freak hurricane, packing far more punch than would be expected this time of year, has destroyed virtually all of the permanent collection of priceless art in the Salvador Dalí Museum here, sources say.

Major paintings by the Spanish Surrealist master – including enormous canvases such as The Hallucinogenic Toreador, Discovery of America by Christopher Columbus, and Lincoln in Dalívision – have been reduced to sagging, worthless sheets of former greatness…

But could it happen? In theory, it could. In reality, the likelihood is very, very remote.

The thought of the world’s largest and, in my view, best collection of original masterpieces by Salvador Dalí being destroyed by such a massive display of Mother Nature’s fury is unimaginable. Obviously, human and pet life comes first, but coming to terms with the loss of such a priceless and extraordinary collection of artistic genius would really never find closure.

There was the fear of this very thing happening, most especially back before the Dalí Museum moved to its present, virtually hurricane-proof building. No one is naïve enough to believe it would be impossible for the museum’s treasures to be devastated by a hurricane, but from all indications such a disaster appears to be virtually impossible.

That’s because the museum at 1 Dalí Boulevard, designed by architect Yann Weymouth, was built to withstand a Category 5 hurricane.

Wikipedia tells us a total of 33 recorded tropical cyclones have reached Category 5 strength on the Saffir-Simpson hurricane wind scale in the Atlantic Ocean north of the equator, the Caribbean Sea, and the Gulf of Mexico. Hurricanes of such intensity occur once every three years in this region, on average.

On the wisdom of aiming for higher ground, the Dalí Museum houses the nearly 100 paintings and other works on its third floor, reportedly 40 feet above the 100-year flood plain. The building’s walls were designed to withstand a Category 5 storm, with winds of 165 miles per hour, while the glass of the building is said to be capable of withstanding the 135-mph winds of a Category 3. 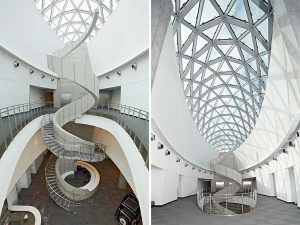 The walls are 18 inches thick with, according to the architect, a greater than normal amount of steel reinforcing beams inside.

We’ll leave the niggling details at that. The overarching point, of course, is that anyone staying up at night worrying that the incomparable collection of Dalí originals in St. Petersburg is in any danger of being dunked into oblivion needs to rest easy.

And for those prone to nightmares, the image of Dalí’s paintings, sculpture, holograms, prints, watercolors, drawings and more washing out to sea is far more frightening than any bit of stormy phantasmagoria Dalí himself may have whipped up on canvas.